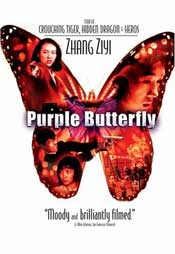 Over the course of last year, China’s up-and-coming star Zhang Ziyi has seen a near-meteoric rise in US exposure thanks to several years worth of films being released stateside almost simultaneously. Following the superb Hero and the lesser, but still stellar House of Flying Daggers, Zhang takes center stage in Lou Ye’s Purple Butterfly. The film, while considerably removed from her previous feudal martial arts turns, is still a period piece, set in 1920s/30s Shanghai, on the cusp of Japanese invasion. Zhang plays Cynthia, a Chinese factory worker involved with Itami (Toru Nakamura), a Japanese government worker. Cynthia and Itami’s romance is cut short when he is abruptly called back to Japan. Cythia suffers another tragedy shortly afterwards when her brother, a member of the Chinese resistance, is murdered by an enraged Japanese man. The film shifts focus to 1931, introducing Szeto, a Chinese business man, and his girlfriend. Their romance is destroyed when Cynthia, now a full-fledged member of deeper underground resistance, accidentally guns down Szeto’s girlfriend at a botched train station rendezvous. On top of this, Szeto gets unwittingly pulled into the middle of the action getting thrown around by both the resistance movement and the newly returned Itami, who has returned to Shanghai as an assistant to a high-ranking diplomat. The plot thickens as Cynthia and her co-conspirators devise a plan to assassinate the diplomat, that involves her rekindling her former romance with Itami.

Lou Ye is fairly adept at weaving Cynthia and Itami’s power struggle together with Szeto’s all-encompassing thirst for revenge. Around the film’s midpoint, the chronology starts becoming cloudy due to flashback sequences that lack clear definition. For the most part the film is beautifully shot, stepping back from the current focus in Asian film on color schemes, and casts everything in a shadowy, noir palette that works well for the story being told. At times, Lou Ye loses sight on what he wants to accomplish in a particular scene and drags it out longer than needed. Occasionally he also makes questionable choices in the method of filming –such as the overabundance of handheld shots. The director’s inclusion of a montage of actual war footage as a coda for the film is somewhat questionable. Although very powerful and moving, the images feel distant and removed, as if through a documentarian’s eye. It only serves to undercut the film’s most interesting dynamic of how the story of these characters exists below the radar of the popular revolt taking place against the Japanese occupation. There are a number of scenes throughout the film where the main characters are shown on the streets set against a background of fires and protest lines seemingly oblivious to their surroundings. They are still inextricably tied to the emotions fuelling the populace, but they’re experiencing them on a far more personal level.

It’s nice to see Zhang Ziyi finally in a leading role after having spent so much time on the sidelines. She gives a great, understated performance, but it’s Ye Liu’s Szeto who steals the show. His portrayal of Szeto as being filled with quiet, volcanic rage makes the character a virtually unstoppable force as well as emotionally identifiable. He’s so iconoclastic within the confines of the film that it’s almost as if he’s a transplant from John Woo’s The Killer.

Purple Butterfly might not be as epic as the films that have brought her to this point in her career, but fans of Zhang Ziyi –and who isn’t really– as well as fans of Asian cinema in general should be pleased with this project.