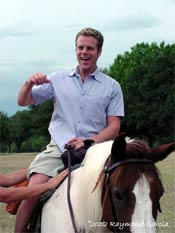 It’s fairly easy to assume Cary Pierce is content with life right now. He’s recently released a new live solo album showcasing some new songs via http://www.emusic.com, he is collaborating with Jack O’Neill on a new Jackopierce album and is working with a raft of up and coming artists.

With a career including five Jackopierce records, one solo album as well as a couple of independently released collections of home studio demos, Pierce has been musically active for well over a decade and shows no sign of slowing up.

O’Neill and Pierce got together in 1988 to form Jackopierce and their acoustic-based folk pop gave the duo a strong following in the Dallas area. Three independently-released albums earned Jackopierce a major label deal with A&M Records and major label debut Bringing On The Weather sold over 100,000 copies. 1996’s Finest Hour followed and included the cult classic, “Vineyard”. The duo decided to call it quits the following year and issued a two-disc retrospective, Decade, with O’Neill embarking on an acting career and Pierce working on a solo album, 2000s You Are Here on Aware Records. Further solo demos and a live album were later released independently as Pierce continued to produce and collaborate with artists such as Graham Colton.

I recently spoke to Cary to get the inside track on his career.

Firstly Cary, I guess the best place to start is with the new live album, which you have released online via the e-music.com network. How does this record differ from your classic Live at Schubas album, and why have you decided to release the album via this medium as opposed to conventional CD?

“All Around Me” is a new tune that I co-wrote with Christian music heavyweight, Chris Tomlin. Also a new version of “Valencia,” and “Best Thing” that I think are worth hearing. Different stories, tales, etc. It’s a lot of fun.

After hearing the new songs you released on the Foreverything collections, a lot of fans maybe expected a new studio album before another live record. Are you working on a follow-up to You Are Here? Any new tunes to mention?

My next solo record is way down on the chain right now. Ahead of it are a Jackopierce record, Awsten record (an alt country/rock project with Chris Tomlin) and a possible kids’ record for Aware/Columbia. 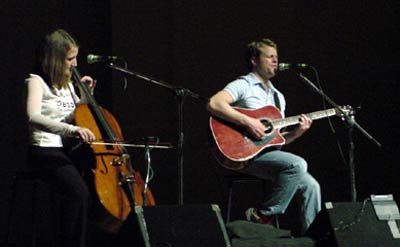 Five years on from the release of You Are Here, how do you look back on that album? I think songs like “Home,” “She’s For Free” among others are enduring classics of yours and it is an excellent record.

Thank you! I am very happy with that record and how it turned out. It allowed me to work closely with some amazing folks like John Fields (Switchfoot) and Gregg Latterman, the President of Aware Records.

I’m interested to learn how you decided to embark on a music career. Who or what influenced you to pick up a guitar and start writing your own stuff?

People noticed I had a voice early on. I just wanted to learn guitar and piano so I could accompany myself. All I ever wanted to do was to play and sing James Taylor tunes. My parents were very supportive and basically pushed me into a career. Even in high school I was making money at it.

Of course, you first achieved fame in the band Jackopierce. You must be very proud of the music you made in the band and the times you had touring. Is there any one incident from that time that sticks out in your memory?

Being on the Rosie O’Donnell show was a big turning point for us. Getting to tour/play with so many acts before they got huge gave us a lot of perspective. Matchbox Twenty, Vertical Horizon, John Mayer, etc. We got to see it all happen. Amazing.

What prompted you to get back together with Jack and start playing again as Jackopierce? I guess you just love playing.

We did a couple shows in Nov ‘02 to test the waters. In order to make it really fun for everyone, we asked Vertical Horizon to be our backing band. That made the transition easy. It was so much fun to play for all of us. 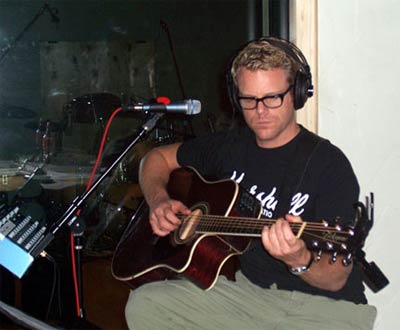 Any plans for a new album with Jackopierce? Any potential song titles?

Yes. We’ve got a ton of ideas. Just trying to work it in to our lives. We’re both dads now and our focuses have shifted dramatically.

Solo artist, member of Jackopierce and songwriter and producer – you certainly keep yourself busy. Tell me about some of the artists you’ve been working and writing with over the past few months.

I’m very proud of the Creede Williams CD that I produced recently. I co-wrote “Unfailing Love” with Chris Tomlin that is on his excellent record, Arriving. Stephen Curtis Chapman sings back-up on it. Tommy Flowers is a band from Australia that I spent about six months with producing/co-writing last year. They learned about me from their love of Graham Colton ‘s record I produced. Their record is not out yet but maybe you can some clips at their site, http://www.tommyflowers.com . I’m proud of it, too. I am currently writing with an amazing Christian singer/songwriter, Jon Abel, here in Dallas. We’ve been playing fundraisers to raise money for his record. It’s been humbling and very rewarding. I’m also writing a lot with Creede Williams for his next record. 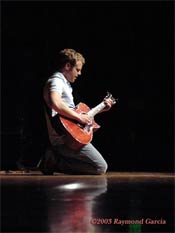 You mentioned one of your former protégés, Graham Colton, who has recently released his major-label debut. You produced his debut nine-song CD and you must be pleased to see his success.

Yes. I feel very blessed to have been a part of Graham’s foundation. It was exciting to have that record be picked up by Universal. Watch out for Graham. That kid’s got drive and it’s gonna happen for him in a big way.

You also mention Creede Williams, who you worked with on his excellent new CD, Something Borrowed. What’s the story behind your alliance with him?

He and I met through a mutual friend. Creede is a real estate mogul here in Dallas that always dreamed of making a record. He’s a great writer and one of my best friends.

Is writing with other artists something you enjoy more than writing by yourself? Talk me through your approach to songwriting.

I love co-writing. I love taking something that is OK and take it to the next level. I love writing for other people and letting them “take it on the road.” I don’t have a desire to hit the road anymore like I did in my 20s. I like being home, raising my boy and being a Dad. I love that someone like Graham will take the work we did and get it out there — on records, on the radio, on stage, etc. I still love to play but not for months at a time.

You have worked with such a lot of talented people during your career, such as Matt Scannel from Vertical Horizon, Graham Edwards, John Fields, Justin Niebank and many others. Who do you feel you collaborate most successfully with?

Anyone. I always go into a situation knowing we are going to get something accomplished. I love working with all kinds of folks.

Which song of your own or of Jackopierce’s would you say is your finest work to date?

I’m proud of “Home” as a tune and as a record. I think we just “got it.” We did it all in one day at a studio in LA with Gregg Wattenberg (Five for Fighting, Drowning Pool).

I’m guessing with your innovative approach to releasing new music, you are all for the downloading revolution, so long as the artist gets his deserved royalties? Do you think that the onset of iTunes and similar software means that real artists like yourself who produce consistent, quality material will prosper while lesser, fly-by-night artists with one good song will fall by the wayside?

Yes. Bands that are embracing and harnessing the power of the web are winning. I look forward to one day having my site re-vamped and having a lot of interactive stuff for people to check out, download and buy.

What CDs are currently in your car CD changer?

You’ve been in the music business a long time. What do you put your longevity down to?

I’ve been blessed. God has a plan for me and I think a lot of it is through my music. We (Jackopierce) were lucky enough to have made an impact on people while we were together from ‘88-‘98. I guess those records just stayed in people’s collections – because now that we’re back, even more people are coming out than they used to in a lot of cities.

Finally, what message do you have for your fans?

Thank you so much for being part of my dream. This was once a dream for me, to have guitars on stands around my house. To make records and play shows for people all over the world. I can’t believe that God has allowed me to make a living making music. I thank you for being part of this blessing. Thanks Andrew!