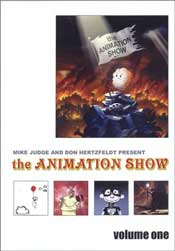 Well, it finally happened. Don Hertzfeldt has become pretentious. Mr. Hertzfeldt has been animating weird, funny, and subversive stuff for more years than you can shake a rotoscope at, and along with Mike Judge of Beavis and Butthead fame has assembled another collection of state-of-the-art shorts. Before we get to Mr. Hertzfeldt’s piece, let’s look a few of the outstanding items on this year’s show.

Opening the film is a clever Bill Plympton piece, “Guard Dog”. You’ve always wonder what some pudgy little dogs see that gets them so excited, and here it is – potential attack on his beloved master by little girls with jump ropes, rabid ninja squirrels, and even an ominous flower that might make him drown in his own snot. All play out in the dog’s mind, but when the real attack comes, this is the pup who takes down his own owner, all in a fluffy pastel world.

Next we experience an oddly animated item called “F.E.D.S.” (Food Education Demo Specialists) by Jen Drummond. F.E.D.S. pass out samples of new products at Wal-Mart and Publix, and they have a life and reality all their own. Sure it’s a crappy job, but its crappy in an interesting way, made even more so by the animation which somehow makes them look like faces printed on decorative shelf liner paper.

“Ward 13” is a stunning claymation story by Australian Peter Cornwell. A man wakes up after an accident, and is nearly subjected to cruel medical experiments. He makes an escape, but it’s a long frenetic chase through faceless corridors and ominous operating rooms to gain freedom. Along the way he meets the coolest little two-headed dog, and its close buddy, the two-tailed dog. Neat.

“Rockfish” shows some of the most accurate life-like animation available today. Blur Studios (Tim Miller and Sherry Wallace) throws some mega-terabytes of processing power at a futuristic fishing trip that drags you and the protagonist on a wild journey though a rocky field until he lands the Big One. He’s all about catch and release, and with some difficulty, the fisherman is the one who gets released.

The artiest composition is “Pan With Us,” (David Russo) a wordless journey in a land of grey and brown cubes that transforms into a colorful elegant party as the forest God Pan retires into our modern world. OK, I had to cheat and look some of that up, but it’s a wonderful set of flowing images, in need of some sort of ultra spacey soundtrack.

Wrapping up the hour and a half program is Don Hertzfeldt’s “Meaning of Life.” I love this guy, and the weird little figures chattering away are as cool as anything, but as we wrap up, Mr. H drops into a weird reverie of white dots flowing thought tubes set to gentle music. I think he lost it at that point, and I’m not sure if the dots are alien sperm, or just cars on the Hollywood freeway in the fog. It’s the weakest film in the lot.

Overall, animation is still a vibrant art form, and while the CGI guys dominate the mainstream, there’s enough film school students with neat ideas and the patience to implement them. I’m sure each one will get about 2 cents for you seeing this collection, but it’s the least you can do for them.