I’ve seen the Nevilles all together maybe three or four times over the last twenty years. The first time I saw them was about 1985 at the long-defunct but now legendary Moonshadow Saloon here in Atlanta. A pre career-resurrection Bonnie Raitt played that night with Ivan Neville as a part of her band. This was quite a show. It felt like The Moonshadow Saloon was inhabited by Spirits. It all seems like a long time ago now. Ivan Neville was a skinny kid back then and had not yet done his turn with Keith Richards as a part of the XPensive Winos. Nowadays, Ivan is looking more like his Dad and he’s acting more like his Uncle Art. Either this was an off night for Art, or Art would seem to be handing over the role of bandleader to Ivan. The theme of this year’s National Black Arts Festival is ‘Generation to Generation – Master Mentor Muse’. I doubt that a more fitting example of Generation to Generation in action could have been found.

Arthur Neville Jr drove this band for many years and has been doing music for well over 50 years. Anyone who stays that long deserves a break and perhaps he is purposely slowly handing over the reigns. Art’s presence was noticeably a bit removed this particular night.

Art was the most influential Brother before Aaron hit the bigtime, having built the Neville Brothers band around a now-legendary earlier and sometimes ressurrected band of his called The Meters. Some of the old Meters-era songs are gone from the setlist and have been replaced by songs influenced by or written by the younger generation of Nevilles. Cyril Neville used to be the youngest and his songs certainly delved into more social commentary and took the band into more serious subjects, rather than relying on the old party standards and Doo Wop that the Neville Brothers were largely built on. Cyril continues to exert considerable influence live – as well as in the studio – but I saw more of Ivan’s leadership in this outing. Cyril still carries the show during his signature consciousness anthems such as “Rosa Parks” and his reggae offerings like “Wake Up,” but Cyril seemed content in allowing Ivan to lead the rest of the time. 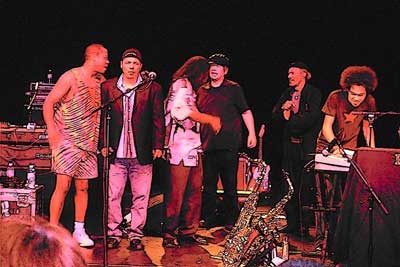 David Whited
The rest of the band take a break as Art, Aaron and Cyril accepet the NBAF Living Legends award

The accompanying shot is mostly The Other Brothers. On this night The National Black Arts Festival organization awarded The Nevilles a Living Legends award and were to award Odetta as well but she was injured and could not make it. Odetta was ably replaced by another legend by the name of Irma Thomas. Irma did a short set of her standards – like “Time Is On My Side” – with the Neville Brothers as her band. She later joined them on a couple of their songs. Irma did not bring her own band but she’s known the Brothers since at least 1962 and I’m sure she has played with them on many occasions. It all worked out beautifully. I just wish that her set had been longer.

I discovered a new generation treasure in the opening act by the name of Raúl Midón. Midón is a living instrument and his style is a remarkable mélange of soul, R&B, pop, folk, jazz and Latin, The rest of the crowd was in agreement and we found that “Ra-UL!, Ra-UL!, Ra-UL!” makes a pretty damn good chant. 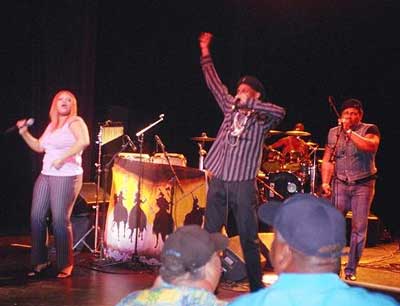 I took this particular picture at the very Moment when Aaron, Art and Cyril were accepting the Living Legends award out of this view. Charles “The Horn Man” Neville is the only Brother in this shot, but it may just be that he’s the coolest – standing back while Art, Aaron and Cyril accepted an award that he was also entitled to share. Ivan Neville did a great job and carried on in fine Neville tradition but he looks just a bit strained here by the pressure of leading this troop.

Ian Neville (Art’s Son – at the keyboard in the picture) is the youngest, most recent Neville member to be added to the band. Ian looks a bit amused by it all or maybe it’s just relief at not having to be shouldering the responsibility that Ivan was shouldering this night.

This band has truly transcended “Brother Band” and has moved into Dynasty territory. It may still be in somewhat of a state of flux at this time, but I fully expect that my grandson will grow up with The Neville Brothers band still out there delivering a heaping-helping of the most uplifting funk to be found anywhere.