Playing an afternoon set at 3:30pm in the shadeless outfield of a baseball diamond in the scorching Florida heat did nothing to discourage My Chemical Romance’s black-clad fanbase from showing up. Many fans camped out in the crowd throughout Saosin, Fall Out Boy, and Hawthorne Heights’ sets in order to ensure themselves a clear vantage point of the band that has played Orlando four times since February, and is scheduled to be back again in October. Clearly the Central Florida teenagers can’t get enough of these boys from Jersey. 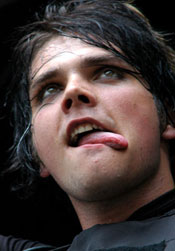 As the set time inched closer and the steam rose off the sweat-soaked flock, dozens of fans were pulled from behind the barricades on the verge of heat exhaustion. One member of security had already been led away, by medics, on a stretcher after a crowd surfer kicked him in the neck. The tension was building as I, and the other photographers, were escorted into the pit and instructed to “stay as close to the stage as possible because when the band starts, the crowd’s gonna go off!” I wa also told that we will be allowed to shoot one and a half songs instead of the standard three because our safety may be at risk if we stayed there any longer. 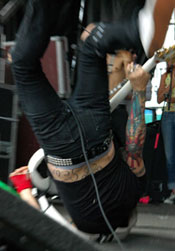 When the band entered to a guitar adaptation of “the Star Spangled Banner,” I wonder what percentage of the audience was aware that this was either an homage or a rip-off of something Jimi Hendrix did in the ’60s. Or could anyone else even hear the patriotic guitar riffs over the ear-piercing roar of the thousands who simultaneously pushed forward threatening to crush through the short fence that held them back? What I’m sure they did all hear was the transition into show opener “I’m Not Okay ( I Promise)” as lead singer Gerard Way ran into view.

Unlike any other band I would see that day, My Chemical Romance elicited the post-punk equivalent of an N-SYNC concert 5 years ago with girls swooning with every move Gerard Way made. The almost makeup-less (I guess he realized that heavy white pancake base is not very practical for an outdoor summer tour) Way was much more confident then when I had seen them open for Green Day months back. With a newly bleached blonde top half of his hair and his standard black uniform that included a bullet proof vest, he fronted the energetic outfit with the presence of a developing pro. Between screams and leaps into the air, he smiled coyly at his adoring fans and teased them with an invitation to get closer.

If Way was the heartthrob of the afternoon, guitarist Frank Lero was the stuntman. His gravity defying ability to do a somersault while playing is one of the greatest tricks I’ve seen a musician pull off. Previously, I couldn’t focus my camera fast enough and I missed the shot, but this concert I was ready for him!

After only 30 minutes, My Chemical Romance had given the crowd their money’s worth ( you know, the $27.50 for the ticket, the $8 service fee, the $10 parking fee, the $3 bottle of water fee…) and the band’s popularity skyrocketed even further into the stratosphere of mainstream culture.