On their way to the Orlando date of their tour with Audioslave and Seether, the guys in 30 Seconds to Mars were left stranded on the side of the interstate when the transmission in their tour bus blew out. This inconvenience, coupled with certain bandmembers’ obsessive all-night viewing of the TV series Lost, had left them all delirious from sleep deprivation. Still, they were kind enough to invite me into their dressing room, backstage at the Hard Rock Live, and give me a little insight into their world.

The name of your band… I read that you got the name from a book, Argus Apacase. So what is that book, I couldn’t find any information on it? 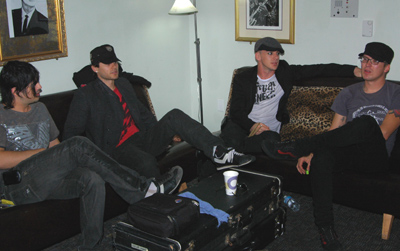 And the name is a reference within the manuscript?

Jared: It’s a reference – a rough translation, so who knows. I think the idea is interesting, it’s a metaphor for the future. It’s a silly metaphor on one hand, but it’s an idea that is being proven – I think – every single day. “Thirty seconds to mars” – the fact that we’re so close to something that’s not a tangible thing/idea. Also Mars being the God of War makes it really interesting, as well. You could substitute that in there, but the thing that’s nicest about the name and what’s important for my brother and I when we were thinking about all of this, is that it be imaginative and really represent the sound of our music in as unique a way as possible. I think that it does that. It’s different… It was either that or “Boiled Hard.”

Boiled Hard?! That kind of takes you in a whole different direction. [To Jared and Shannon Leto] You guys started the band initially and you used to play under a different name every night. Do you remember any of those original names?

Jared: Yeah, well, there was Boiled Hard, Boiled Egg, Boiled Cabbage, and just Boiled Boiled. You’d get those fans that’d come out for Boiled Boiled and they’d be like “Hell, what the hell happened here, man?” 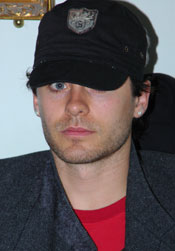 Jared: Boiled Harder…which is our sequel.

Jared: Reboiled… Hardest. You didn’t know you could reboil something, but if you try hard enough. Reboiled, the name of record, The Hardest Boil yet. [This went on for a few minutes as the four deliriously tired guys entertained themselves with “Boiled” jokes until I changed the subject].

Aside from the name, the symbols that you use, where do they come from? Is that an homage to Led Zeppelin?

Jared: Not really an homage, but I think that symbols and signs and icons, you know, represent things in a different way. Music being this auditory experience, I guess it’s nice to have a visual representation of those things. I always loved bands, when I was a kid, like Pink Floyd where you not only got the music but there was a visual world there that you could see, whether it was the artwork or in the films that they made that really took things to another level. So that was a goal for us in the very beginning as well. Zeppelin had that, um, The Who certainly had that…

Shannon Leto: [bursts out laughing uncontrollably] Sorry… Our bus broke down, and we didn’t sleep.

Jared: I got about 23 minutes.

Matt: We were thumbing it on the side of the highway with tractor trailers just whipping by [laughs].

Well, I’ll take it easy on you guys… So what was it like writing and recording in Africa? How did that change the direction you took with the album?

Matt: Had we done the entire writing and recording process in L.A. it would be a much different record. I think it took a change of scenery, and a change of physical location to kind of capture a different kind of feeling and theme for the record.

Jared: Just being away from everything you know, kind of forces you to think of everything differently.

Matt: You fall into that mundane, routine existence and we’re not about that. We’re a band that’s about changing, and getting inspired and – for us – we had to travel halfway around the world to do it.

Jared: We probably would have made a record that we were proud of anywhere, but at least now we had a really interesting experience making it, as well. We also recorded all over the United States. We did some stuff in NY, up in Chicago, a few things in L.A. and you know, in 3 different production locations… It was nice to have that as part of your life experience. 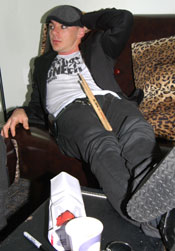 Who would each of you say is your biggest musical influence?

Jared: His [pointing to Tomo] is obvious.

Tomo: Zamfir. He’s the panflutist from the Galapagos Islands. Just the melodies are incredible. And then came Morbid Angel.

Matt: If Joe Strummer and Johnny Rotten had a child that would be my baby.

Shannon: That wouldn’t be yours, it’d be theirs.

Matt: It would be mine. I am held by no laws.

Did you ever get to see Joe Strummer?

Matt: Unfortunately not, he passed away before I ever got a chance to.

Jared: He probably didn’t give a flying rat’s ass if you got to see him. [everyone laughs]

Matt: That’s the beautiful thing about him – he didn’t give a fuck.

[To Jared] Well, how ‘bout you, who’s your big influence?

Jared: Probably… It’s a toss up between Menudo… [I laugh loudly]

Jared: No one shakes their bon-bon like I do, except Ricky.

Shannon: Yeah, Jared really can shake it with the best of ‘em. 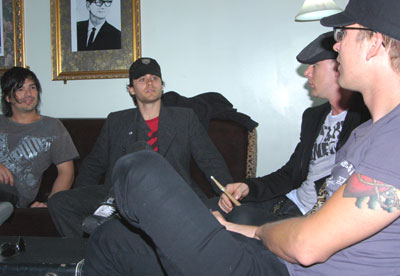 Shannon: Do you remember Tiffany? [everyone laughs]

Jared: What about the blond one, before her? Debbie Gibson.

Shannon: Or Taylor Dayne… I like all sorts of music. I don’t really have one influence, it’s different people at different times in my life.

Not even one drummer who first got your interested in playing?

Shannon: No, different drummers at different points in my life.

Jared: That’s the thing, there’s not just one…

Matt: It’s like saying ‘What’s your favorite band?’ – it changes.

Jared: I think Robert Smith may have influenced my guitar playing, and maybe Kurt Cobain as well. The fact that you could be completely average – technically – and have your talent and artistry be the most important thing. I think that changed music the most – he probably changed music for most of us, saying that anyone could do it. You just had to believe in what you were doing…

Jared: It doesn’t have to be, but even bands before [Nirvana] like Mudhoney – who obviously influenced Kurt Cobain – I loved Mudhoney, and that whole scene.

[To Jared] Do you find it easier to get inside a character within a song you’ve written as opposed to within a character for a film?

Jared: There is no character.

I guess that was a bad choice of words. When you lose yourself in the writing, when you create that world, is that a different mindset then for a movie role?

Jared: It’s as different as you writing this article, and then taking photographs of the show. Which you do both.

Jared: They both come from the same place, but they’re different processes.

You also studied painting and filmmaking.

Jared: I went to school, I wanted to be a painter or a graphic designer. Large format, very graphic, visual 3-dimensional art I’ve always found really interesting. Like Damian Hurst’s “Shit Smears” was an interesting show, and “Millenium Portraits”… It seems like a lot of the great art really does come out of England. I keep trying to get back there to look at it.

Do the rest of you have any other creative passions outside of music?

Tomo: Of course. We all have other interests.

Tomo: I love to cook.

Tomo: I could actually never do that, that’s my first time.

Matt: Tomo’s just a man of many talents. He can do the [popping noise with his finger in his mouth]. I can’t even roll my tongue. [everyone starts rolling there tongues]

Shannon: Can you turn it upside down?

Jared: Can you burp out your colon in the Ganges River?

Jared: Exactly… Burp out your tongue in the Ganges River.

Matt: I think Buddhist Monks can.