with The Fiery Furnaces

A respectable crowd of a couple hundred milled around The Social for two hours after door time, waiting for the enigmatic Deadboy and the Elephantmen to go on. “This had better be worth it,” I thought as I counted the minutes. 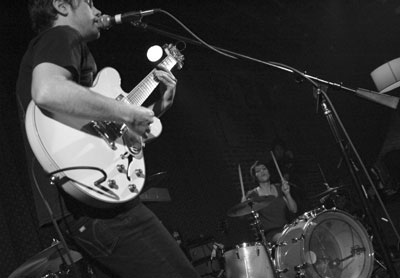 Jen Cray
Deadboy and the Elephantmen

With nothing else to do I started observing the crowd. Mostly indie kids, as expected, but sprinkled into the mix were quite a few metal guys. How could I pick them out? They were the dudes with long, frizzy rocker hair and old faded band tees of obscure metal acts like Goatwhore, and Obituary. Now why would these guys be drawn to The Social on this night, when the headlining band is The Fiery Furnaces – a band about fifty miles south of hardcore? I watched them come alive when the openers (DB and the E) went on, and made a mental note to do some serious digging the following morning to find the connection between this blues punk duo and old metal. 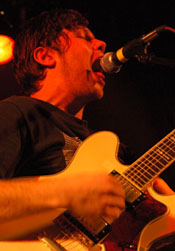 Here’s what I found on them: Vocalist Dax Riggs formed a sludge/thrash metal band called Acid Bath in 1991 in his home state of Louisiana. After developing a small cult-like following, the band was torn apart by rampant drug use and tragedy. Band members went on to other projects including Agents of Oblivian, Crowbar, and Goatwhore.

Fast forward to the year 2000 and you’ve got the morbidity-inclined Riggs forming a new project named after two of his obsessions: death and the Elephant Man (the film of which altered his formerly religious beliefs and – in short – fucked up his head for years). After recruiting Tessie Brunet to play drums and sing backup in 2004, the two recorded their debut album We Are Night Sky for Fat Possum records. Now on tour with The Fiery Furnaces, they easily won over this Orlando crowd who shouted for more after the too-short 20 minute set.

“Is that it?” I heard someone yell to the duo as they exited the stage.

Uncomfortably high pitched opera played out between bands and as the night got later, I almost gave up on TFF and went home. I’m glad that I stuck it out. 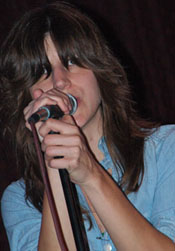 Siblings Eleanor and Matthew Freidberger are the core of The Fiery Furnaces, though two other band members join them onstage. Resembling a young Patti Smith, Eleanor clutches the microphone from the far corner of the stage and effortlessly holds the attention of the formerly impatient crowd. The energy is, thankfully, higher than I expected – sounding nothing like their ultra mellow latest release Rehearsing My Choir (a concept album based upon the siblings’ memories of their grandmother, Olga Sarantos).

I stayed just long enough to get a good taste of Eleanor’s sultry vocals and the bands’ erratic guitar play.