with Himsa, A Life Once Lost, The Acacia Strain, Dead to Fall

BackBooth is about the size of a two bedroom apartment. The stage is tucked into the corner of the “living room,” and there’s a spiral staircase that leads up to a tiny loft that looks down on the room. It’s dark, it’s grimy, and it’s the best place to see a hardcore show in Central Florida. This was the Feb. 28th home for the “Undoing Ruin Tour” with Darkest Hour, Himsa, A Life Once Lost, The Acacia Strain, and Dead to Fall. 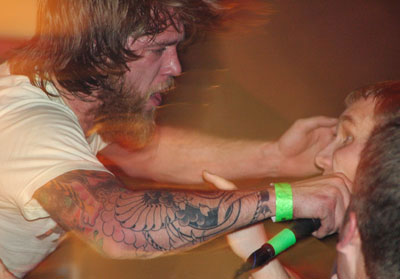 Jen Cray
A Life Once Lost

As hundreds crammed into the space, and I found myself a “safe” spot behind the crowd that would soon become a horrific pit, Chicago’s Dead to Fall appeared. A crowd like this, which had already waited for hours to get inside, was just looking for an excuse to explode, and the metalcore attacks of DTF were all they needed to commence chaos.

The Acacia Strain furthered the energy, encouraging the pit to grow wider and more destructive (but in a “help one another out” sort of destruction). The flimsy rail behind which I shot became a diving board for eager crowd jumpers who flew over to the pit and onto heads before clawing their way to the stage… only to turn around and plummet back into the madness. 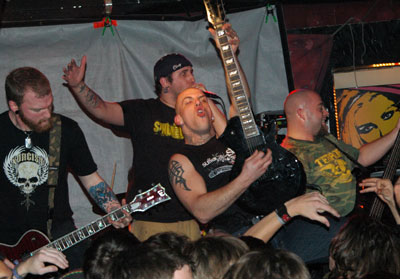 As anarchic as the audience was getting it remained peaceful until, ironically, the hippie hardcore act A Life Once Lost performed. I call them “hippie hardcore” because they had a lavalamp Fillmore West oil and water light show projected on a screen behind them. That and the fact that the singer (who was the spitting image of Brad Pitt’s character in Kalifornia – meaning creepy, scruffy Brad not pretty Brad) was wearing a Pink Floyd tee and cutoff shorts. Anyway, the energy dropped off during their metal meets “smoke pot!” flowery proclamations, and two fights broke out. I believe that the crowd just got a little bored. 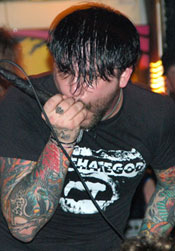 All thoughts of boredom or brawling ceased when Himsa went on. I’d seen them open for Danzig a few months ago on the Blackest of the Black tour and thought that they were ok, but forgettable. That opinion quickly changed seconds into their set of harsh metal punk. Blistering in a way their fellow Seattle alumni were not (don’t get me wrong, I love me some grunge!), vocalist Jonny Pettibone seems to have taken some notes while touring with the former Misfit. His onstage persona (and of course the devilock), and even the way he holds his mic has hints of Glenn Danzig. Here’s a little secret, too – he’s such a huge Danzig fan that he has a photo of him and the man saved on his cell phone (he showed it to my girlfriend when she asked how that tour was for him). But all comparisons aside, Himsa stand on their own as a band to be respected. I have a feeling I’ll be seeing Himsa again headlining their own tour in a much bigger venue.

Darkest Hour, who had played a killer set at BackBooth opening for Converge just four months prior, were a sneak attack. When you see them offstage they look kind of geeky. Singer John Henry wears glasses, a red plaid shirt, and a green hoodie. Onstage the glasses come off (and you’ll notice that he squints for the whole set because of this), and this primal growl comes out of his slight frame. He goes from looking like a member of Death Cab for Cutie to producing some hardcore Death Metal! This D.C. act is carrying the torch for Victory Records and keeping their label tied to the hardcore sounds they’ve always been known for.

The audience got dangerously worked up from the first song and shooting from within the crowd becomes a risky business. After four songs, I dug my way out and left the pit to those unafraid of getting bloody. Sweaty, stiff, and amped-up from a night of intense modern hardcore – I left feeling satisfied.