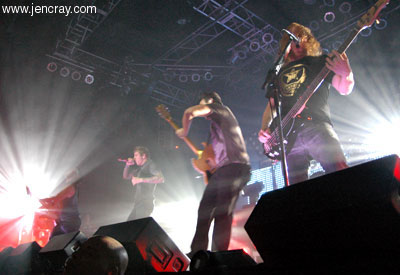 In its second year, Kevin Lyman’s winter version of the Warped Tour invaded Orlando with a lineup of today’s emerging metalcore acts backing the veteran Deftones. As the doors opened at 4:30 on an overcast Florida afternoon, thousands of black t-shirted fans stormed the baseball diamond at Tinker Field to camp out in front of the lone stage (which served as main stage and mini side stage to the in-between bands) for 6 hours of ear-splitting “chaos.”

Prior to the show I found myself backstage having a photo shoot with Orange County, California’s Atreyu. Vocalist Alex Varkatzas told me how great it is to have a consistent set time every night, as opposed to the crap shoot of the summertime Warped Tour, when bands could play at 12 noon one day, and close the show the following night. “Though I’m still not used to having to get up early every day,” he confesses. And what about the constant media attention – the interviews, the photo shoots? “I’m used to it, but… I didn’t get into music to be a cover model.” 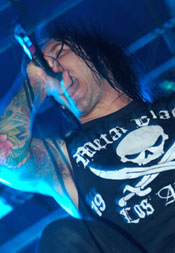 Jen Cray
As I Lay Dying

The first of the six headlining acts, Funeral for a Friend, took the stage around 5pm and the Florida skies stayed kind (for the moment). Midway through the South Wales band’s set, hand signals and shouts to “stop the music” came from the crowd in and around the circle pit. A body lay motionless on the wet grass and dirt. Singer Matt “the Rat” Davies jumped down into the audience to encourage the audience to help up the anonymous fan at their feet. After the security crew got the guy up and out (he had dislocated his knee and collapsed from the pain), Davies thanked the Orlando audience for helping one another out, “…otherwise it’s just not worth it, “ he said.

After each headlining main stager, the 20 minutes of set change time was allotted for the second stage acts to perform in a bathroom stall-sized corner of the same stage. Though the majority of these bands tended to sound like the last one, never having down time between music is a brilliant concept that alleviates the tendency of long shows like this to grow tiresome. 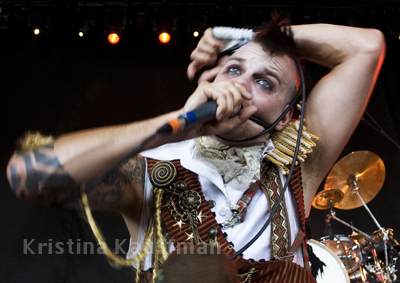 Of the six side bands I saw and shot, only one stood out as not only the best of the openers but one of the best of the whole tour: Street Drum Corps. Three guys dress like characters from Mad Max, with blacklight paint tribally streaked on their faces, and they make amazing sounds with pipes, steel cans, and whatever else they could get their hands on. If you go to this year’s Taste of Chaos tour DO NOT MISS THEIR SET!

As for the big name bands on the bill, the abrasive metal sounds of As I Lay Dying, and Atreyu spun the rain-soaked ( did I mention that it eventually rained? Of course it did, because I was their trying to photograph an outdoor festival and I am a magnet for hard rain in these situations!) crowd into a frenzy. Combining the large stadium sounds of Iron Maiden with the hardcore roots the bands’ native Cali is known for, As I Lay Dying and Atreyu represent the new breed of metal: metal with a punk rock upbringing. 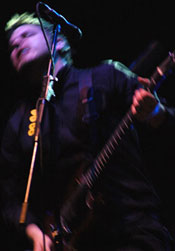 Story of the Year didn’t impress me too much, though they were a blast to shoot (lots of jumping and great facial expressions)! Thrice is an acquired taste and I think that my taste buds are coming around. While not the most exciting of entertainers, the music stood out with subtle complexity that reminded me of Radiohead. For a band known for its emo-core recordings, their current release, Vheissu just may be their genre’s OK Computer.

To close out the evening, the Deftones appeared to show these kids how it’s done. The band has been around for over a decade, has a loyal following, and hasn’t played Florida in years so the audience was going nuts for them. Though musically they were tight, I thought they were upstaged by the Street Drums Corps, whose set was just before theirs. I must say of the Deftones – I don’t see what the big deal is. 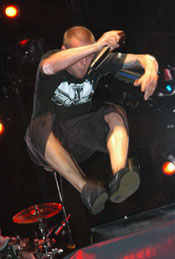 Jen Cray
Story of the Year

Overall, the Taste of Chaos tour is about more than just the bands that make the lineup. It’s about the day, the experience, the overload of music. If you were disappointed by last summer’s Warped Tour because of the domination of softcore emo pretty boys, the TOC tour may renew your faith in the new generation of music.