An Opening Act of Unspeakable Evil

An Opening Act of Unspeakable Evil 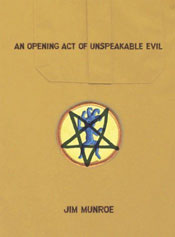 The epistolary novel – a story told through a series of letters – is nothing new. However, in An Opening Act of Unspeakable Evil, author Jim Munroe adds a modern twist, structuring events via letters sent to an anonymous and unknown audience: blog posts.

Kate’s blog begins innocently enough, describing her twenty-youngthing alt-dot life, working at an art gallery, dealing with the Toronto indie scene and its assorted (and familiar characters). However, it starts getting weird when she walks in on roommate Lilith in the midst of what appears to be some sort of demonic ritual, with pentagrams, burnt offerings and chanting in strange tongues. Lilith readily admits to a non-standard childhood, the daughter of serious practitioners of some eldritch religion involving witchcraft, incantations and demons.

Meanwhile, Kate, dissatisfied with the artless stupor of her gallery day job, decides to turn a downstairs shopfront, technically part of their apartment, into a miniature art gallery of its own. As part of the opening event, she convinces Lilith to perform her ritual. It goes over like gangbusters, and before we know it, Kate, Lilith, and two dudes are driving across the country with this strange performance art piece, loosely centered on the ritual, opening for indie bands.

Romantic entanglements – unforeseen, right? – ensue, and for all its way-off-the-mainstream nature, our touring act can’t help but encounter the tired litany of woes that befalls anyone trying to live in a van from gig to gig. Our story reaches a fevered pitch in a bayou rave, where events strobe like light and shadows from a bonfire. Is Lilith consumed by her magickal upbringing? Is it really as dark as it’s made to seem? Munroe handily twists in a surprise ending, making what could have been a saccharine outcome into something that ends happily but solidly.

Jim Munroe’s style is clear and engaging, and he takes great advantage of the whole blog-post format, weaving fantasy sequences and long gaps between updates into part of the action. More importantly, it captures the tone of the so-called “blog revolution” – not in an analytical way, but in more of a demonstration of what the blog zeitgeist has yielded, a window into the drama of everyday life. Given such a magical toolbox, it’s remarkable that Munroe never overdoes it, putting style ahead of substance.

An Opening Act is a great read, a definite page-turner. The book is independently published with zeal by the author himself, and his No Media Kings website is also a comprehensive reference for those wishing to do the same, or to visit some of the more esoteric of Munroe’s amusements and thoughts.