On this – their last – stop on the Motion City Soundtrack tour, Chicago indie pop/performance art foursome OK GO make the stage their own. With just 30 minutes to warm up the capacity crowd, between openers Plain White T’s and headliners Motion City Soundtrack, OK GO managed to not only hold the crowd’s undivided attention but to exit to a rousing standing ovation.

With a paisley backdrop projected behind them, OK GO ran through a string of catchy pop rock tunes including “Television, Television” and “Invincible” off last year’s Oh No. As fun as the music and performance was, I wasn’t completely convinced until singer/guitarist Damian Kulash led the band into an impressive (and unique choice) cover of ELO’s “Don’t Bring Me Down.” 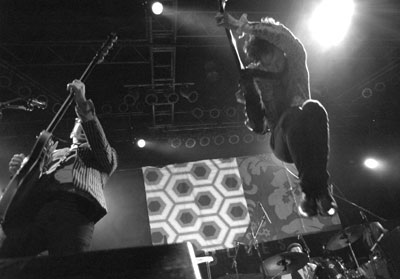 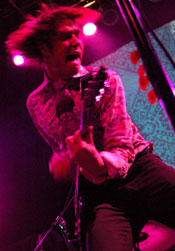 “Whenever I ask the crowd ‘who’s heard of Electric Light Orchestra?,’ it’s usually a bunch of 14 year old girls screaming (imitates young girls screaming). It’s like ‘shut up! They’re like 15 times older than you!’,” Kulash tells the crowd.

Crowd participation is a big part of the OK GO show. Later in the set, Kulash called for an over-21 volunteer. He hands the girl some cash and asked for a double whiskey, no ice. “It’s the last night of the tour for us, so I figure the band can play for another 20 minutes – and I’ll just drink.” Call me old school, but I love to see bands drink onstage. Unless they’re teenagers or recovering addicts I want to see bottles and glasses on those amps! So cheers to Damian for indulging!

For the final song of the night, Kulash went off on an anti-MTV tirade (to agreeable applause, which I found funny considering the masses looked as if MTV picked out their clothes and haircuts before buying them tickets to the acceptable TRL-approved rock shows) before he and the band performed a choreographed dance to their new single “A Million Ways,” which played over the speakers. The dance seemed to push them into the hearts of everyone in the place, who responded with the aforementioned standing ovation. 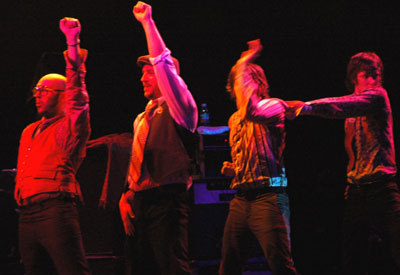 As refreshing as it is to see a band drink onstage – in these “straight edge is trendy again” days, it’s just as great to see a band unafraid to take risks and maybe look a little silly. 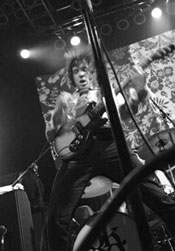 And speaking of “silly,” I just learned (via the OK Go website) that immediately following the show Damian Kulash was arrested outside the venue. Why? For not moving when a police officer asked him to move himself, and the crowd of fans who had gathered to get autographs, away from the entrance to the House of Blues. According to the website “he was immediately handcuffed and taken inside the venue to chants of “Let him go!” From that point he was “shoved into the back of a squad car and taken “downtown,” a ride that became more fun when the SUV full of girls pulled up next to the cop car waving FREE DAMIAN signs.” He spent 9 hours in a jail cell, but retained his sense of humor long enough to get the arresting officer to watch their “A Million Ways” video on the on-board computer.

For those who don’t know, the Orlando House of Blues is on Disney property. Beware of the Mickey Mouse mafia!