with Band Marino, Mike Dunn & the Kings of New England

I used to get really annoyed when a national band would come to Orlando and plug in a couple of local acts to open their shows. As the local scene has shifted, over the last couple of years, to include more versatile, risk-taking artists I have found myself not only showing up early enough to catch the local’s sets, but on some occasions seeking them out more so than the headliners. With this newly-opened mind, I arrived just on time to the Rainer Maria show to catch Mike Dunn & the Kings of New England.

Backed by a capable band of musicians, Mike Dunn got the audience’s attention with his twist on alternative folk reviving the spirits of Dylan and Petty. This modern expression of Southern songwriting was extended upon by the impressive works of Band Marino. 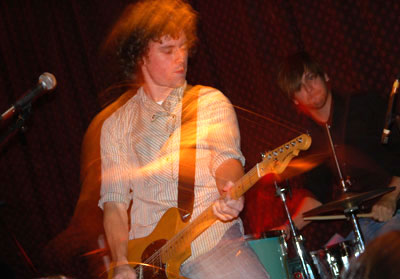 They’re young, they’re talented, one of ‘em is a Gucci model, and their instrument inventory goes beyond the basics to include banjo, mandolin, and train whistle! I have never been a fan of alt-country, but there is something special about this band that surpasses even the Wilcos of the genre. Their debut album was released late last month, and if their live performance is any indication, good things should be expected.

The trio of Rainer Maria took the stage and opened with the two strongest songs off of their latest release Catastrophe Keeps Us Together (“Catastrophe,” and “Life of Leisure”). I’m all for starting off strong, but giving the crowd what they want before they have a chance to let the anticipation build is a risky move. Criticisms aside, Rainer Maria sounded fantastic and vocalist/bassist Caithlin De Marrais adds the bonus flavor of looking, and even dancing, like Sixteen Candles-era Molly Ringwald. Her bright red hair glows against the pink and red lighting, and her voice is even more confident than on record. 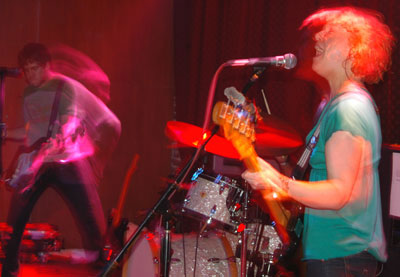