Little Steven’s Underground Garage-A-Go-Go’s 4th of July event at Tampa’s Hard Rock Casino featured Buzzcocks, The Chesterfield Kings, The Gore Gore Girls, Fortune & Maltese , and The Unrequited Loves. It wasn’t a tour, it wasn’t a private event, and- yes- it really was free!

It’s surreal to walk through a casino full of retirees and lineup to see the Buzzcocks. It’s even more surreal to watch corporately-attired men rubbing shoulders with young punks- whom were being harassed by the casino’s tight-faced security even before the first band played. “Back away from the stage,” was the command that fell on the deaf ears of the understandably enthusiastic youth. It’s the freakin’ Buzzcocks, man! Did you think everyone was gonna sit down, sip martinis, and politely applaud?! These guys played with the Sex Pistols and The Clash back in the day, I think that they would expect a little energy from their audience. 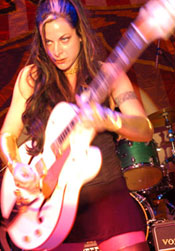 Before Little Steven Van Zant (of Bruce Springsteen’s E Street Band, and actor from The Sopranos) came out to introduce the first band, a line of go-go dancers came out to the edge of the stage to “entertain” us for what was to become a badly choreographed “before every band” embarassment.

Tampa’s The Unrequited Loves kicked off the bill, and looked like a band of high school math and science teachers trying to relive their college years. The guitarist and bassist both looked either bored or embarassed to be up onstage, leaving the poor drummer to exude the only elements of excitement in the trio’s performance.

If The U L’s were the teachers than Detroit’s Fortune & Maltese could have been mistaken for the school principals. At least a step in the right direction as far as sound and energy went, the retro sounds of F&M was more Kinks- and MC5-inspired than their clean appearance would lead one to suspect.

Were it not for the next band the night would have been so far suffering from a lack of “fuck yeah!” The second Detroit band on the bill, and one of the best of the city’s current roster, the Gore Gore Girls take the sweet harmonies of The Shangri-La’s, the tampon-flinging attitude of L7, and the garage rock fuzz of The Stooges to an end that whips even the most jaded concertgoer into submission.

Opening with the appropriate, “Casino,” the girls with their Gretsch’s rounded up the room and reminded the free-loading crowd that this was a party! “When I ask you ‘how you doing?’ You say, ‘Fuck You!’” instructed head Gore, Amy Surdu. They were my main reason for surviving on little sleep to make the drive down to the show, and they made the night worth it.

I spent most of The Chesterfield Kings’ set mingling and searching for the Gores. I tracked down Amy and guitarist Marlene Hammerle- as The C Ks’ vocalist was hanging from the scaffolding doing his best Steven Tyler-meets-David Johanssen impression- who remembered me from last year’s show at Will’s Pub. After making arrangements to hook up after the show for some portraits, I settled in to finally see the 30-year veteran punks bring the night to a climax. 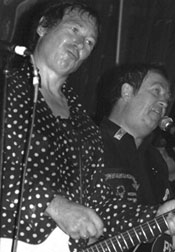 Ignoring security’s glares and idle threats, the pack of kids downfront turned the stage into a diving board almost immediately. From the pit, over the crowd, to the stage, and back in again. And original Buzzcocks members Pete Shelley and Steve Diggle were loving every minute of it! Though Shelley seemed to have slowed down a bit in his years, Diggle was in the crowd’s face- swinging his guitar around and generally behaving like a fresh-faced punk new on the scene.

After the gloriously high spirited set- which included classic songs “What Do I Get?” and “Orgasm Addict,” alongside a couple new tunes- Diggle even stuck around to sign autographs and chat with fans. So, I got my Diggle portrait and signature, and was off for my shoot with the Gore Gore Girls who just put the cherry on top of an already perfect evening by being so damn cool!