It was a Dashboard Confessional weekend at Orlando’s House of Blues, with three consecutive sold-out shows for the band’s current tour with Say Anything and John Ralston. “Emo for adults,” is how DC is being marketed, yet the crowd was virtually adult-free. I attended the middle show of the residency. 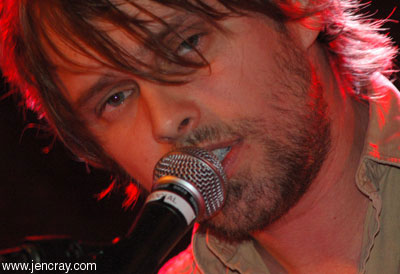 Central Florida singer/songwriter John Ralston opened up with a folky set that had girls down front screaming along to every word. Is he this popular everywhere, or is it the homecoming factor that has this young singer sitting on top of stardom on the large stage? It doesn’t really matter because in Orlando, at least, the boy’s a star apparently!

Los Angeles emo-pop boys Say Anything answered a question for me halfway into their set… Who sings that irritatingly catchy song with the chorus – ‘I called her on the phone and she touched herself?’ Answer: Say Anything. It’s just one of those songs that’s so ridiculous that it works. The Max Bemis-fronted band is somewhere between the pop friendliness of Cute Is What We Aim For and the excepted legitimacy of Saves the Day. The band could have easily packed the venue on their own, so add Dashboard to the equation and you get, well, three sold-out shows. 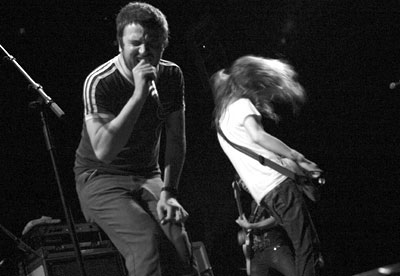 Chris Carabba (who, let’s face it is Dashboard Confessional ) walked onto the elaborately decorated stage and the crowd practically rolled him out a red carpet. Greeted with near hysteria from the Energy Drink generation (which is what my girlfriend has dubbed them because none of them drink alcohol because straight edge is all the rage, yet they ingest caffeine like it’s water!), the well-inked frontman looks eerily like a modern day Ken doll. Emo Ken. Ken gets a Tattoo and picks up a guitar, what will Barbie think?!

Another Florida boy on the bill, Carabba is of the Jack Johnson variety. His style could be best described as Emo Surf, or Beach Folk. It’s easy listening, but not in a James Blunt sort of blehhh. The crowd is eating it all up, even the newer material off the band’s new release, Dusk and Summer which seems more plugged in than their past efforts. Though a fine performance, it did not strike me as spectacular. Still, from what I’ve been told, this second performance was the best of the weekend. Glad I wasn’t here for the other two!