Sounds of the Underground Tour

Sounds of the Underground Tour 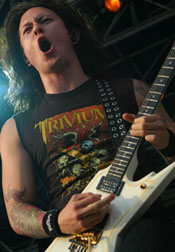 Bubbling up form the murky depths of the underground are the sounds of grindcore guitars and death metal drum fills. This year’s annual Sounds of the Underground tour promises to deliver the heaviest metal this side of Ozzfest to Orlando’s Tinker Field. Headlined by As I Lay Dying and featuring 11 bands of new and old- including Cannibal Corpse , Behemoth , In Flames and Gwar – it was the kind of summer afternoon that Beavis & Butthead would have dreamed of.

A series of up and comers, beginning with Through the Eyes of the Dead , started the day promptly at 2pm. With stage changes kept to an efficient 15 minutes, the music only paused long enough to give the masses just enough time to pee and reload with another drink. The beer lines were strangely short for a metal fest in 95 degree heat. Was it the underage factor, or the straight edge fad- I couldn’t say. Maybe a bit of both, but thirsty souls over the age of 21 had no problem getting our fill! Come on- it’s a metal show, am I gonna drink water?!!! 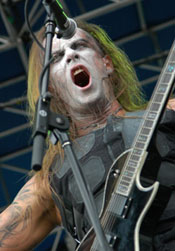 Of the early bands, Terror stood out as the most promising. The Cali crew, tough-looking dudes who could have strolled in off a construction site, wet the front rows with sweat while churning out aggressive- in sound and in performance- metalcore. As good as they were, it was Behemoth who really delivered. Long hair, spikey boots, and ghostly makeup, Behemoth’s Polish brand of black metal was a precursor to Gwar’s over the top production. Fairing better this time around (the band’s performance on Danzig’s Blackest of the Black tour six months ago fell flat to my ears), the band played as if trying to outrun the daylight before racing back to the comforts of darkness. When meeting the band later on, out of makeup, I was surprised just as much by their sweet demeanor as by their clear complexions- we’re talking heavy makeup on an outdoor summer tour! These guys should give some tips to Aiden and My Chemical Romance on how to avoid breakouts! 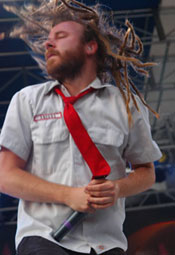 As the security guards slipped on raincoats and mutant-shaped cannons were rolled out onto the stage, the crowd began their excited chants for the special guest of the tour, Gwar. The kids were psyched, and the photographers were nervous. “Are you going down front? Will they shoot over us, or target us? What’s the blood made of?” and a series of other worried questions were exchanged all around me. It was my intent on getting closeups of the bloody, semen-spilling, monster dressed, thong-wearing theater of S&M and horror movie magic. Come what may, I was determined to get my shots! Of course, I also brought my 300mm lens- just in case!

Dodging the mess, I watched a devil cop get skewered, a Nazi Pope disemboweled, Dubya scalped (with a pile of shit nicely replacing a brain), and one of the band’s “slaves” eaten by a T-Rex. Seeing Gwar is an experience required for any concert fan because they have no shame and no boundaries! Watching the crowds walk around for the rest of the day with their clothing and skin stained red and blue is a nice bonus! 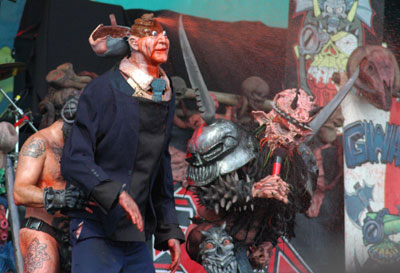 Cannibal Corpse gave a hair-raising performance of Tampa death metal, soon surpassed by Orlando natives Trivium , and Sweden’s In Flames. The latter two are at the forefront of the current thrash upswing and as they played into the sunset the crowd took in the metallic sounds either by joining in the large circle pit, or by soaking it up while lounging on the greens of the baseball diamond’s outfield. The heat of the day had taken its toll and all around were collapsed black-clad bodies lying on their backs (myself included) debating whether or not to stick it out for the headliners or escape to the air-conditioned comforts of home.

Jen Cray
As I Lay Dying

After the sun had set, San Diego’s As I Lay Dying emerged and the masses, who had just moments before seemed half-asleep, exploded in the post-hardcore euphoria. Fronted by Tim Lambesis, the band who has had its place on all the major touring festivals within the last couple of years (Warped, Ozzfest, and Taste of Chaos) filled the headliner shoes comfortably, and delivered satisfactorily to those in search of the metal undergound sound. It was a day of metal, and a day of clear skies in a Central Florida summer- what perfect way to spend a day at the ballpark.