Riding With Strangers: A Hitchhiker’s Journey 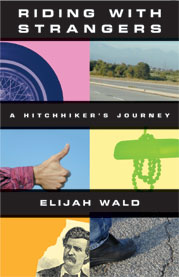 Ok, so I got this book from Matthew a couple of months ago, read the damned thing, and liked it so much that I can’t write a review of it.

I’m scared that whatever I put down will fail to properly give this thing it’s due.

All well and good, except that yesterday I’m tootling around town and swing by the postal office and check my box, and lo and behold, ANOTHER copy of it is sitting in the box, freshly arrived from the publisher, again, just as if I’d never received the first copy.

This book WANTS me to review it, and it’s not going to take my pathetic excuse for not writing the review I originally agreed to write, sitting down.

So ok, I’ll just wing it here, and hope for the best, hoping that this book knows better about what I’m about to write than I do.

‘Cause I’m telling you, boys and girls, I literally have no idea what I’m writing right now as one unknown word follows another across my flat panel.

This is a book about hitchhiking.

A much maligned and kicked around subject if ever there was one.

People who posture as tough guys, carry guns around in their pockets, and generally work their hardest to persuade everybody else that they’re the baddest bad-ass around, will NOT hitchhike.

And if Johnny Bad-ass ain’t gonna hitchhike, then who is?

The fucking Television Poisoning has (among a woefully long laundry list of other maladies), persuaded us one and all that hitchhiking is a death wish. Random style. Like playing Russian roulette or something.

Which is not only sad, it’s also STUPID.

We’ve permitted ourselves to become brainwashed by giant corporations who own the media, along with the local and national government and all their craven do-gooder agencies.

Anybody home out there?

Anybody out there who can think for THEMSELVES anymore?

People believe what’s spoon-fed to them, no matter how retarded, ridiculous, or reactionary.

And since there’s no money in it for the corporations (as opposed to having people try backflips over rocky ravines on bicycles in the fucked-up X Games or something equally stupid), said corporations have decided that it’s ok to tell everybody how dangerous hitchhiking is.

What a bunch of utter bullshit!

And yet all you guys out there have decided to believe it!

You’re all out of your minds. Slaves to the machine. Willing tools. Uncreative dwellers of containment vessels, both fixed and mobile.

And the government and the corporations LIKE IT that way.

You are so much more malleable that way.

So very much more controllable and docile that way.

Dear motherfucking god, heaven forbid that I should actually go OUTSIDE and just put myself into an environment that hasn’t been sanitized, sanctioned, and officially sponsored in a way that will assure me that it’s all going to be ok.

What the fuck is UP with you people, anyway?

You crave independence, self-sufficiency, and strength, and yet NONE of you actually know how to operate ANY of it.

Which brings us back to hitchhiking.

It’s an outsider activity if ever there was one.

Nobody is in charge of hitchhiking.

Not even the cops.

All the cops can do is cause you problems if you try to hitchhike in a place they don’t want you to, but when it comes to hitchhiking in places that work just fine, their authority disappears as surely as a puff of smoke in springtime breeze.

And so, hitchhikers write their own ticket, travel their own road, and do this so far beneath the radar that they’re invisible for all intents and purposes.

Meanwhile, Joe Cellphone is hermetically sealed within his SUV, completely isolated from human companionship and all social interaction, leaving a trail of credit card receipts wherever he goes, and the government and the corporations watch his every move through their microscopes, with intentions toward Joe that Joe is far better off not knowing about.

Fuck you Joe, you deserve every last rotten thing that happens to you.

You don’t have any social skills because you never place yourself in a situation where you’ll have to actually deal with strangers, and do so pleasantly.

You’re an asshole, and you like it that way.

Hitchhikers, on the other hand, can blithely intermix and mingle with a world of new persons and places that Joe Cellphone can’t even imagine exists. The television hasn’t told him about any of this stuff, so of course he has no awareness of it. After all, where else is Joe supposed to get his life’s store of knowledge if he doesn’t get it off the tv? Or maybe the latest offering from some fucked-up rapper or somebody?

Joe is so controlled that it’s not even funny.

Joe is pwned, top to bottom, side to side, and front to back.

Joe is also hypnotized (by the corps and the gov, natch), however, so he believes himself to be the captain of his own fate, and further believes that hitchhikers are not. There’s enough irony in that to pick the motherfucker up with a magnet, in case you were wondering.

The guy who wrote this little book about hitchhiking.

Elijah has set out to prove Joe Cellphone wrong, via the most simple and elegant method of disproof available.

Elijah’s gonna hitchhike cross-country, from one coast to another, and write a book about it when he’s done.

In a single stroke, all of Joe Cellphone’s dearly held misconceptions are exploded into nothingness.

Nobody gets killed and eaten.

Nobody goes to jail.

Instead, Elijah opens a window onto a world that most everyone else has somehow forgotten.

And that is the world of face to face encounters that can only be experienced by traveling with strangers to some far off destination.

You can travel with strangers on the subway or the elevators in your office tower for the rest of your miserable, pointless life and never so much as suspect that the world Elijah limns might so much as exist.

And, oh yeah, while we’re at it here, let’s not forget that Elijah also manages a coast-to-coast jaunt FOR FREE.

So here’s Elijah, out there on the edge of the asphalt, and he’s immersed in things in a way that all the viewing of, reading about, listening to, and talking over will never EVER duplicate, or even describe properly.

The fucker’s having an actual experience and it’s a good one!

He’s getting to know America in a way that Americans themselves have completely failed to pick up on.

Americans, in case you were wondering, are a bunch of dumb motherfuckers, convinced that they’re all gonna die at the hands of terrorists, who swallow every last thing whole that swims past them on their tv sets or cd players, and who also wouldn’t know a real experience from a goddamned cyclotron.

This book tells a wonderful tale of people, places, and things in a completely engaging way.

Elijah has done a fair bit of hitchhiking over the years, and he cheerfully shares all sorts of tips and tricks with his readers. He’s also one of the best advocates for hitchhiking that I’ve ever come across, presenting his case lucidly and entertainingly.

I’m not going to get into the retelling of Elijah’s tale here, I’ve decided.

He does it well enough that I’m gonna leave it all up to him.

Which means that YOU, dear reader, are gonna have to go out, find this book, and read the damned thing.

This is a rewarding book in so many different ways, that I’m not going to bother to enumerate them all. Suffice it to say that Elijah’s story works on multiple levels of discourse, and handles all of them well, from the trivial to the profound, weaving them all around and through the central motif of a vagabond on the side of the road, seeking favor from strangers.

So get your hands on this thing and read it through, when you have time to actually consider the fullness of what you’re reading.

And then go try your luck on the side of the road, if you’re not too much of a puss, Johnny Bad-ass.

And while you’re at it there Johnny Boy, maybe knock of the bogus Bad Boy pose for a little while.

Or otherwise you ain’t gonna be getting no rides, you dumb sonofabitch.