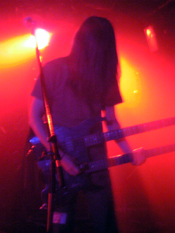 As soon as I found out Boris were playing in Shinjuku I headed to Lawson the next day to buy tickets. After twenty minutes of fumbling with the computer, having two clerks assist me, scrolling through every event in the Tokyo area, and arriving late for work in a cold sweat from the deathly fear of not being able to see one of the best bands in Japan, I had the tickets clenched firmly in my clammy little hands. 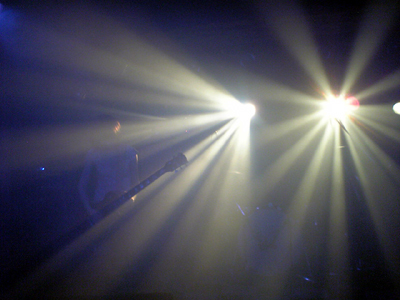 The first part of the set was frenzied and rockin’, many of the songs were off of their recent Pink album. At the end though, they slowed to a crawl and did what they do best, letting the drone destroy you from the inside out. Wata, the guitarist, and Takeshi, the bass player, were so still that their bodies became beautiful, black statues against the thick, white smoke. Atsuo too, was a sight to behold, as he contrasted against the frozen Takeshi and Wata. He was out of his mind sweating and flailing against the drums, with his long hair flying all over. It was gut-wrenching and mesmerizing. Boris are downright addictive. 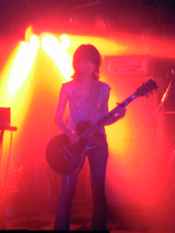 After Boris came Guitar Wolf. Lead Wolf Seiji was dressed in head-to-toe leather, and as soon as he got onstage he chugged a beer and began sweating. I don’t think he even needed to move to begin sweating. He’s filled with so much fucking energy that just being alive causes him to sweat, not to mention all of the leather. He played about four songs and spent the rest of the time posing, throwing himself into the crowd (who were going fucking nuts), and creating human pyramids with audience members he pulled onto the stage. I might add that the first two pyramids collapsed before he could climb on them, but thankfully the third pyramid was a success.

Seiji grabbed his guitar, stood atop the sweaty pedestal and played for about a minute-and-a-half before it destroyed itself. Something so surreal couldn’t have lasted any longer. The pyramid members weren’t as lithe as Guitar Wolf and their departure from the stage was clumsy and frightening, especially when a portly fan swung from a rafter, bending the metal frame, which made it look as if he was going to bring the whole ceiling down. The band kept up the energy throughout the set and even had enough left over for an encore.