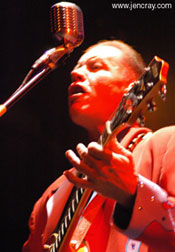 Rockabilly veterans Reverend Horton Heat tend to come to town about once a year- and always with a kick-ass opening act. Yet every year something comes up and I’m not able to make the show. This time around I planned ahead and made sure I could finally lay witness to the Rev. And the kick-ass openers for 2006? The Horrorpops!

“Have any of you ever seen Horrorpops before?” asks vocalist/upright bassist Patricia Day. “So there are a lot of virigins out there. Well, just sit back, relax,and this won’t hurt a bit.” 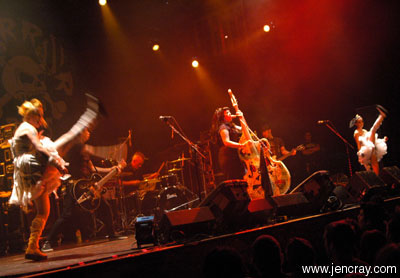 Psychobilly/Pop/Punk (even a touch of ska) ensues and once again the Denmark band has the audience at their mercy. For those unfamiliar with the magic that is Horrorpops, let me paint you a picture: Patricia is a tattooed Bride of Frankenstein- only sexier, her hubby Kim Nekroman (of Nekromantix) plays guitar along with former AFI/Tiger Army member Geoff Kresge. Drummer Niedermeier brings up the back, and two psycho-fied go-go dancers flank either side of the stage. Now doesn’t that sound like a good time? 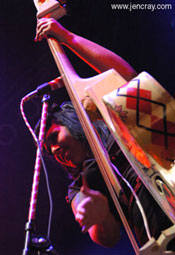 The audience, even the virgins, are singing and dancing by the third song and party has begun. They shoot through a set that includes “Miss Take,” “Freaks In Uniforms,” and- my favorite- “Walk Like a Zombie.”

The Rev. (Mr. Jim Heath) has a Dick Dale quality about him that stands out as he closes his eyes during long instrumental breaks, with the guitar leading the music along. His red and grey old country jacket and hillbilly vocals evoke images of Johnny Cash (whose classics were the preshow music, by the way), and his thin smile seems to say, “I’ve seen it all.” The man, and the band, have been doing it for 15 years and have built a cult following over that time that rivals The Cramps.

The band is still touring behing their most current release (not including their Christmas album released last year!), Revival, but they toss in a few old favorites to keep the masses smiling. A RHH show is a party- one of those shows where half the people there are watching the band, and the other half are mingling with old friends and nodding their head to the music that plays in the background. The booze flows, the mood is high, and the Rev. seems to be loving it all!

To see more photos of this and other shows, go to www.jencray.com