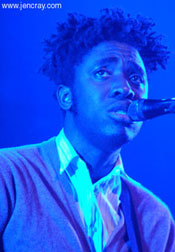 Bloc Party cancelled the rest of their US tour opening for Panic! At The Disco. Why? Because they realized that they’re too good of a band to be opening for a bunch of pre-pubescent pretty boys in frilly shirts and makeup? Though that may or may not be true, the real reason for the cancellation is that drummer Matt Tong suffered a collapsed lung three days into the tour and had to be hospitalized. He’s alright, he’s recovering, but “no travelling,” says the doc.

I was lucky enough to catch their show, in Orlando, the night before the incident. Opening for the pinup post-Fall Out Boy stars meant that they were playing on a college campus to a soldout crowd inside the UCF basketball arena. Masses and masses of people crammed into the general admission halfpipe shaped gymnasium, mostly for the headliners.

I arrived with barely enough time to elbow my way through the crowd before it was time for Bloc Party’s early set. They looked small on the large stage, and once again I had to experience the band in a setting not quite conducive to their Joy Division-meets-the-Cure inspired brand of Indie Rock. The first time I caught the British quartet was last year at Music Midtown in Atlanta, a three-day outdoor festival at which Bloc Party had an early Saturday afternoon set. While the indoor, nighttime gig this time around was an improvement in atmosphere, still the band’s lush sounds beg to be heard in a tight space. 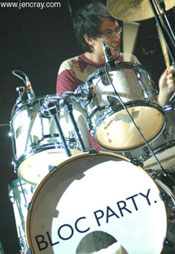 Singer/guitarist Kele Okereke’s voice soars on “This Modern Love” and “Banquet,” and Tong’s hard-hitting drumming strains to fill the open space above the youthful crowd. The band sounds hot, Okereke is becoming a more comfortable frontman, yet boredom raises its head due to no fault of theirs.

I’m not saying Tong’s health problems are in any way a good thing, however, I don’t see how staying on this tour would have helped Bloc Party spread the word of how great they are as a band. They should be doing their own tour of smaller clubs- winning fans from the trenches, not the nosebleed seats. Get well, Tong, and get your asses on the club circuit!