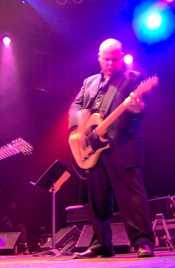 We missed the opening act, Kentucky Prophet, due to a latent childhood attraction to Legos and the existence of the Legoland store near the House of Blues in Downtown Disney. Nonetheless, the crowd was enthusiastic when a black-clad Frank Black gave them props between songs shortly after the set began. But I’m getting ahead of myself.

The club was sparsely populated when we got there, which was a bit surprising. It filled up some before the curtains parted, but it was never what I’d call crowded. Nice. Frank Black and some personal space seem to go together like coffee and mugs.

Smooth-headed and dressed in a black suit and shirt, the soon-shiny Frank Black led his capable band through a shortish set of Frank Black classics spanning his solo career and a couple of interesting covers. No Pixies songs, mind you. The man has class.

My familiarity with Black’s catalog is limited to a handful of songs and “Sir Rockabye,” a gem of a track off an obscure Hello Club EP (those need to be re-issued, Flansburgh). But I was surprised at how many songs I recognized off the stage – “Ten Percenter,” “Headache,” the smirking “I’m Not Dead (I’m In Pittsburgh)” off his new album, Fastman Raiderman. These were peppered with covers like Roxy Music’s “Re-make/Re-model” and Larry Norman’s “Six-Sixty-Six,” Black also credited that Pittsburgh song as being written “mostly by Reid Paley.” 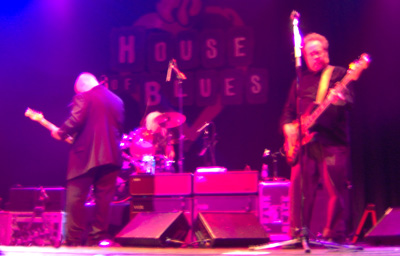 The date – a Friday the 13th, in October no less – seemed a bit conducive to the overall mood of the set. Songs about dying, living a terrible life, making bad decisions, contrition, regret, paranoia… it seemed like Black was making a mix tape for a death-row inmate. Whether that was intentional or not, it worked to great effect. 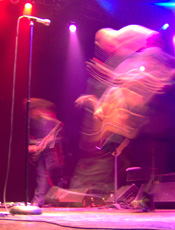 Heavyset and shaved bald, Frank Black wouldn’t look out of place selling you tractor parts or running the latest PowerPoint on sales figures in the conference room. In this age of prettyboys, his presence on stage seems a mismatch, at least until he opens his mouth to sing. His bandmates – the legendary Eric Drew Feldman on bass, Duane Jarvis on guitar and Western Beat impresario Billy Block on drums – also looked distinctive, and played their instruments with whip-crack accuracy and ferocity. Drummer Block was particularly entertaining, grinning and bouncing his platinum Shih Tzu cut to the beat, often communicating with Black via grimaces. Black traded between his signature blonde Telecaster and an acoustic steel-string for his guitar in some songs, and Jarvis correspondingly put on his black Les Paul for something twangier (a hollowbody I didn’t recognize) in those numbers.

A handful of concert-goers wore Pixies hoodies and such, and I wondered what Black thinks of seeing them in the audience wherever he goes. His songs often carry part of that signature Pixies sound – the dropped measures, loopy chording and disjointed vocals – but it’s clear from this performance that he has amassed an outstanding body of solo work that will eventually dwarf his days with that band.