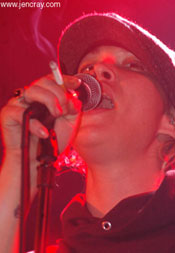 From the UCF campus chock full o’ Panic! At The Disco fans (no, I didn’t stay for their set), I bolted across town to the sweet, dark confines of The Social for The Detroit Cobras. Having arrived pretty early, we had the place virtually to ourselves till just before the openers went on.

“Excuse me… What time is it?” the redheaded drinker to my left with the thick Alabama accent asked me.

“Thank you, ma’am,” he said with good Southern manners before addressing his friends next to him. The strangers slowly peeled themselves off of the barstools and slowly filed onto the stage. So this must be the band, I thought.

Taylor Hollingsworth & The Spidereaters , “Ignore the moniker on the bass drum that says ‘The Death Machine’ that’s our drummer’s metal band,” the countrified frontman told the loose crowd. These three ‘bama boys proceeded to kick out an ambitious blend of blues rock performed with a wild-eyed sneer. The modest “crowd” mostly stayed where they were for the set, paying enough attention to be just a step above “polite.” For the band’s final tune they chose a ZZ Top cover to which the drummer (the redheaded “Death Machine”) explained, “Throw away all yr records except for ZZ Top, Motorhead and ours.” I don’t know about throwing my records away, but I did run over and buy one of theirs. 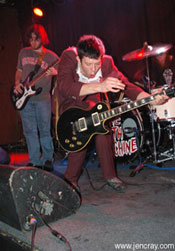 The Detroit Cobras have got only two core members- vocalist Rachel Nagy and guitarist Mary Ramirez. Like most garage bands from their scene in Detroit, they borrow members from other bands to fill in the blanks on tour. I recognized the bassist from having come through months back with the Gore Gore Girls. Last time I saw the Cobras, they had a Dirtbomb and the vocalist from The Reigning Sound on stage with them. It’s one big game of musical chairs in that scene, which is part of its charm.

When Rachel Nagy swaggered onto the stage, she lined up several bottles of Amstel Light (of which she never ran out, thanks to the guys in the- now wide awake- audience, who kept buying her more) and lit the first of many cigarettes. The poison sticks she smokes are an instrument to Nagy, they add the Joplin-grit to her vocals and form a smokey haze around her, through which her eyes and smile gleam. 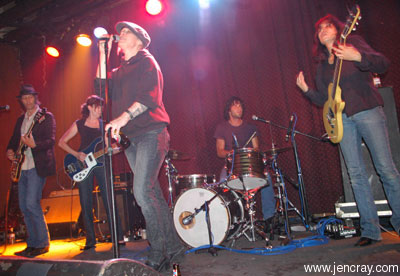 The room was turning into more of a party at this point, as the band pushed through a set that included “Cha Cha Twist,” “Midnight Blues” and the band’s sole original “Hot Dog (Watch Me Eat).” For those unaware, the Cobras are all about digging up old R&B tunes you’ve either never heard or forgotten even if you had, and vamping them up with an edge. They’re known as much for their soulful sounds as they are for their abilities to hold their intoxicants, and that’s all part of their charm.