The 90’s are back, man. The leftover guys from Stone Temple Pilots have got a band with the singer from Filter; the Lemonheads have a new album out; Alice In Chains are in the midst of a “reunion” tour; and the Afghan Whigs’ Greg Dulli has brought Screaming Trees’ Mark Lanegan on board for his Twilight Singers tour. All we need now is a Courtney Love scandal and I’ll throw on a flannel and pretend it’s 1994… Oh wait, she just released a book of her diaries- a nice bookend to the Kurt diaries she published a few years back. It’s official, we have gone back a decade to a time when grunge was all the rage and heroin was chic. 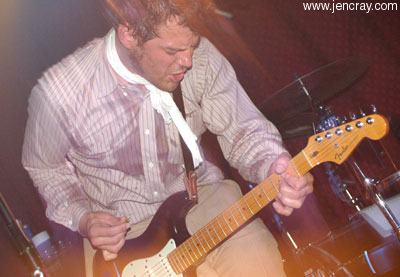 The prospect of reliving my teen years through the soulful voice of Greg Dulli was only half of what drew me to The Social this night. Stars of Track & Field put out a beautifully oblivious debut this past summer that I was eager to hear performed live. I call it “oblivious” because, according to drummer Dan Orvick, they genuinely were not aware of how much they sounded like The Postal Service and Snow Patrol. The Portland trio did not disappoint. Kevin Cabala and Jason Bell’s duelling guitars and vocals jump from a whisper to a wail, creating a mounting tension that climaxed with fuzz, distortion and chaos.

The band quickly packed up their gear- into the most neat and organized band trailer I’ve ever seen- changed their suits (well, not vocalist Kevin, who wore his sweat proudly) and ran back inside to get some beers and settle in for the headliners. about 300 other patrons did the same.

Twilight Singers has been an on & off project for Dulli since 1997. It became his main focus after the Afghan Whigs called it quits in 2001. With a constantly evolving cast of characters backing him, the current tour has Lanegan on guitar and backing vocals.

For those unfamiliar with the band’s sound, it’s pretty much a natural progression in a soulful direction from the blues rock he perfected in his first band. The latest release, Powder Burns, is the band’s fourth and was recorded in New Orleans- before, during, and after Katrina. The songs are given added ambience live, as the band performs in near darkness. Hiding inside the umbrella of reddish lowlight, the club is a smokey haze of nodding heads and moving hands. It’s not the most memorable performance, but it’s music that’s beautifully executed.

To see more photos from this, and other shows, go to www.jencray.com.