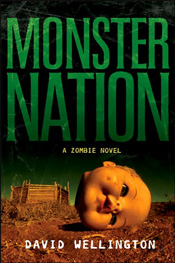 You have your wide range of boogeymen, your werewolves, aliens, maniacs, what have you. They all live on the precarious edge of a binary existence: Either they’re alive, or they’re not. Alive, they generate all manner of gore and dissonant string scores. Dead, relief and time to roll the credits.

Do you see where this is going? The zombie (and to a degree its undead brethren) stands apart from this rabble. The horror of the zombie is not just its infectious bite, which it shares with vampires and others, but its implacable nature. A zombie doesn’t want power, or control, or a woman, or some other plot device that can be turned against it. A zombie just wants to eat your brains. Yours. Then it’ll be your turn to eat someone else’s. Zombies always win, and they’ll always be around for the sequel, should anyone alive be left to film it. Maybe the robots, but that’s another book.

In Monster Nation, David Wellington takes us into an America quickly falling into the clutches of the walking dead. The archetype of the epidemic novel is Stephen King’s The Stand, and like that book, Monster Nation has a narrative that follows a close set of main characters. Between thread shifts, Wellington inserts all manner of modern-day blurbage, from email excerpts to fark.com posts to newscasts, factoids that document the ongoing zombification of America.

Wellington tracks the disintegration of the country with a break-neck pace, and he takes the interesting route of occasionally putting you in the (rotting) head of the zombie, giving you its perceptions and motivations. It’s often a gruesome scene – this book is not for the squeamish – but it’s fascinating nonetheless. Along the way, we meet all sorts of memorable characters, like Nilla the sapient zombie, Bannerman Clark, an obsessive military type, and the Civilian, Clark’s gruesomely political superior. Oh, and some Scottish zombie uberlord.

Is there a happy ending? Who cares – the writing is fast-paced and able to leap across great chasms of disbelief. Even the most absurd scenes on here (and there are plenty) all seem to fit in with this particular descent into madness. If you enjoy your horror fiction free of miracle cures and haunted by Dick the armless zombie, this is definitely the book for you.