It was another two-night residency at Orlando’s premium smalltime venue, The Social. The popular spot has found its niche in booking high-end underground acts and stacking the bill with loads of talent. These double-headers have become almost a monthly ritual (recent two-nighters have included Mute Math, Lucero and coming up next month, Less Than Jake), and inevitably sell out quick. The bill that most sparked my interest this month had Bouncing Souls in big letters, with The Street Dogs , Whole Wheat Bread and World/Inferno Friendship Society providing more than enough support to keep the energy flowing. 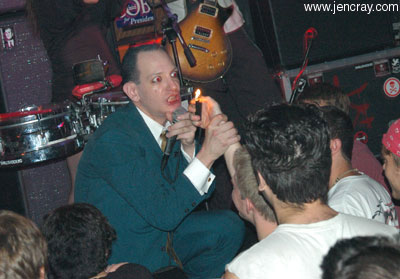 World/Inferno Friendship Society are an ever-shifting band of circus freaks who play showtunes for dirty punks. Frontman Jack Terricloth wears red contacts while onstage and dresses like Pee Wee Herman. His trusty, cabaret-inspired orchestra fill the space with gorgeous sounds that border between Broadway, the Bayou and the Bowery. Audience members who have obviously experienced the World/Inferno before, take to the floor and put down the most unconventional dance moves that take a bit of swing, a bit of waltz and a whole bunch of what tha?! The band is all about the SHOW, about ENTERTAINMENT. What a way to kick off a night of punk rock of every flavor! 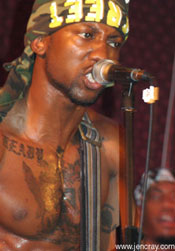 Whole Wheat Bread are young black punks who dress pretty damned hip hop. I said it, it’s out there- boom! It may be wrong to think, “Wow, they’re black and they play punk rock!” just like it’s wrong to say, “That white guy is rapping?” but it’s just the bare facts. You cannot not notice the fact that these three dudes from Jacksonville look like they’d be more into N.W.A. (or even Jay Z) than old skool street punk… It only takes listening to their soundcheck to realize that you’re in for a stereotype-destroying treat. This band is straight up early Green Day pop punk. They toss in some hip hop flavor (lead singer/guitarist Aaron Abraham spits out a rap about his love for Golden Girls-age women with large bank accounts), but are surprisingly sugary sweet. They seem more influenced by the white boy Cali punk than east coast hardcore (and all-black) punks, Bad Brains.

When Boston’s The Street Dogs play a show- and I’m willing to bet that it’s like this everywhere- the crowd is full of Dropkick Murphys t-shirts. Reason being, frontman Mike McColgan was the original vocalist for the famed Boston Irish punk boys. He dropped out of the band after their first release to become a firefighter, but after only a few years found his way back into the clubs, this time fronting his own outfit that has more roots in English Punk than Irish pubs.

The show they give this time around finds McColgan uncharacteristically floor-bound (on more than one occassion I’ve seen the man do an impressive full-on split while jumping off of the drum rise!), perhaps due to the small confining stage, he was nonetheless in the crowd’s faces and pushing the already circling pit into overdrive. “They must’ve been handing out crack at the door,” he said, “‘cause you guys are nuts!” Kicking the set off early with the easily memorable chorus of “Not Without a Purpose,” the band interlaced the fun aggression of their sounds with often political and heartfelt lyrics, in a manner only Social Distortion and The Clash could do better.

On what was not only the second night of the bill’s time in Orlando, but the second night of The Gold Tour as a whole, Jersey’s Bouncing Souls started off the show with “Lamar Vannoy,” the opening tune off of their sophomore album (released in 1996, boys and girls!) Maniacal Laughter, and then proceeded to play the album in its entirity! This rare occassion was well received by the already frenzied crowd. 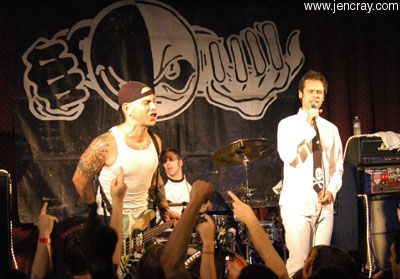 Onstage, vocalist Greg Attonito has a very laid-back lounge singer personality, even donning in an all-white casual dress look that could be very Vegas. Counter-playing Attonito’s Tom Jones is bassist Bryan Keinlan, who is the raw energy that moves a Bouncing Souls show forward. He is the jumping, the spitting, the posing- he is the soul that bounces and he does not disappoint. While their sound, and presence, is more matured and a bit less angry than their openers, the band with the top billing satisfied every soul inside The Social.

To see more photos of this and other shows go to www.jencray.com.