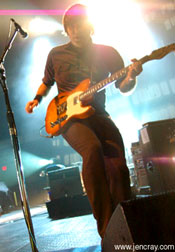 Appropriately booked at a college campus, Seattle’s shoegazers Death Cab For Cutie rolled into Orlando for a crowded show at the UCF Arena. On a light bill that featured one quick opening act ( Ted Leo & Pharmicists ) and an early showtime, it was a night designed more for socializing than for rockin’ out.

I got inside just as Ted Leo and his band were two songs into their 17-minute set. 17 minutes! Not that the audience was exactly clamoring for more… They largely ignored the indie folksinger, who had to defend his band at one point, instructing the hecklers to blame him for any sound problems. “It’s my fault, not theirs,” he said. At the end of his time onstage, Leo thanked Death Cab and apologized for his “tantrum.” Ted Leo’s the right speed for a Death Cab crowd so I didn’t understand why they would give the guy the cold shoulder. I guess he has to make an appearance on The OC before they’ll open their ears to his sounds. After all, that’s how the headliners achieved their “overnight success” that was about 6 years in the making.

It’s really a shame that DCFC have gotten so mainstream as to require them to play the larger venues- and I don’t mean that in a “they soldout, man!” kind of way. This band does not have the onstage power to fill up an Arena with sound and energy. Neither does Bob Dylan, and I LOVE Dylan, but when I saw him play a basketball arena four years ago I spent half the show staring at the clock! Some music is just not meant as a means of mass entertainment, it’s meant to be warm, tight and intimate. 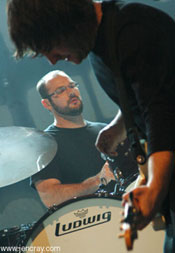 Death Cab makes gorgeous music that sould fill up a House of Blues, or- better yet- a small club. And though the band found their footing a little more comfortably on the large stage than two years prior when I saw them open for Pearl Jam, they still failed to convince me that they are a band that’s ready for the big time. Great musicianship, great voice, but Arena band?

Vocalist/Guitarist Ben Gibbard left his timidity backstage with his glasses and let his inner Postal Service come out. He rocked side to side while at the mic and more often danced around in slight convulsions with his guitar leading him through. Fellow guitarist and producer wunderkind, Chris Walla, is more subtle in his movements, prefering to close his eyes and fall into a trance-like state while the music plays on. 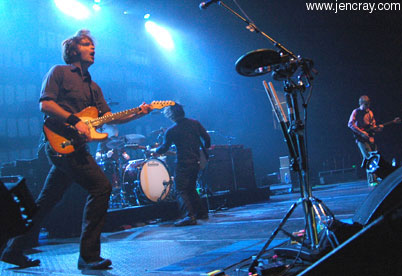 As unmoved as I may have been, the college crowd stood transfixed, staring at the band beneath the lights as if experiencing some sort of transcendental revelation. What I may experience in the private confines of a car with a stereo turned up, or in a smokey bar with a band so close you can feel the sweat- these people were able to experience in the air-conditioned open space, with a band seemingly miles away.

To see more photos of this and other shows, go to www.jencray.com.