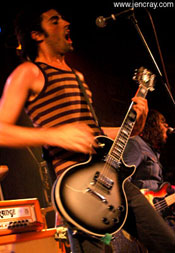 There’s a good reason as to why Mute Math played two consecutive nights during Orlando’s Anti-Pop Festival, at The Social… Because they are one of the greatest live bands touring the club circuit these days. Their experimental sounds (“Sting on acid,” as described by my girlfriend) sound good on disc, but phenomenal when brought to life through the elaborate production and stage acrobatics that define the Mute Math show. On the second night, word had spread and the venue was packed with the already converted and curious onlookers.

Opening act Jonezetta offered a surprisingly creative arrangement of pop, indie and disco (there I said it). The Mississippi act falls in between the hip creativity of Franz Ferdinand and the sacharine pop of Action Action. Frontman Robert Chisolm’s vocals recall Robert Smith on the Cure’s happier tunes. They finish off their set with the highly danceable “Hot Machete.”

Aided by the vibes of a packed house, The Whigs showed a stronger presence than they did when they stood on the same stage a couple months back. Being rid of the pressures of headlining,and seeping themselves deep in the delirium of being on the final days of a long tour, the trio were exhausted offstage but in high spirits on. As amazing of a time as they’ve been having on the road, “we’re looking forward to getting home,” they told me. 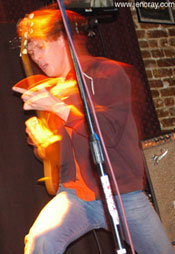 In preparation for the New Orleans-born (most members have since spread to Nashville after Katrina wrecked their homes) foursome, the stage was covered floor to ceiling with various lighting contraptions. And where there wasn’t a light there was an instrument. This is a multi-faceted band of musicians who swap instruments mid-song and can hardly stand still, from what I had seen on video.

The video footage of Mute Math was not a fluke, frontman Paul Meany was doing handstands on his keyboard, pouncing off every amp or instrument onstage and running through the audience, videotaping the thrilled Orlando crowd. Oh yeah, he sang and played the keys and keytar really freakin’ well, too! The band plowed through most of their self-titled full length debut, an album with songs so good, bands could spend their whole career trying to write just one of ‘em (“Noticed,”“Chaos”). 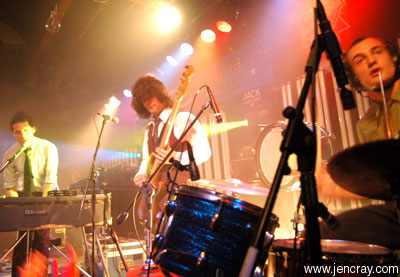 Describing the kinetic pace of a MM show is a difficult task, for there are no words to capture the spirited performance that this young band delivers. Drummer Darren King is one of the strongest, most magnetic drummers to come along in a decade and he matches Meany’s energy ounce for ounce. The man actually duct tapes his headphones onto his head at the onset of each performance to allow him the mobility to jump around.

For the encore, the ever popular “Reset,” Meany ends the song playing an instrument (designed by King) called The Atari. The unique piece has a sound chip taken from the old Atari game Space Invaders that can be manipulated with knobs and by running your fingers up and down the neck of it. The Atari is ceremoniously passed from Meany’s hands into those of the crowd who become part of the band’s finale. 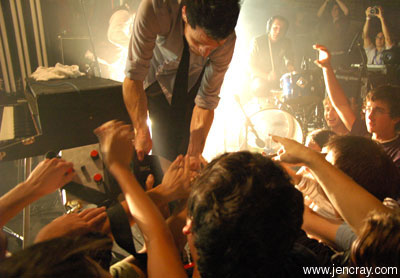 After the show I spoke with Meany, whom I was supposed to interview, and was astonished to discover that he was horribly sick. He could hardly speak and yet he led his band through a jaw-dropping performance in front of a nearly soldout crowd. As a sidenote, I had my interview with King instead, so stay tuned for that.

Too see more photos of this, and other shows, go to www.jencray.com.