with Hurrah and John Ralston 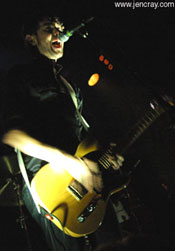 Everyone with their ear on the pulse of the music world knows that The Mars Volta is comprised of “those guys from At The Drive In.” Dig a little deeper into the tomb of ATDI and follow the trail of the other 3 members (Jim Ward, Tony Hajjar, and Paul Hinojos), this will lead to Sparta. After 3 albums in as many years, and a couple lineup adjustments (Hinojos out, Matt Miller in; Keeley Davis added on guitar), frontman Jim Ward put the band on hiatus. Now the band is back with a mighty album and a headlining tour. Even without any national acts to share the billing, The Social had no difficulty filling up for the band that crosses over from Indie to Emo to Post Punk and back again.

A couple of local regulars opened the show. The ever popular John Ralston and experimental outfit, Hurrah. I caught the last half of Hurrah’s time onstage and what I heard was straight out of the Doolittle playbook. With two guitarists and three male vocalists, the band had enormity and passion, but the heavy reliance on the Pixies’ brand of sound was hard to overlook. If these guys could whittle down their blatant influence to a mere hint of color and style, then we could have a real powerhouse of sound on our local hands.

Blowing any expectations I had about them clear through the roof one song into their performance, Sparta proved mightier in person than on album. Ward’s live voice sounds like Perry Farrell at his most visceral. His presence onstage is captivating in the way Thom Yorke is captivating. He’s not all over the place, he doesn’t even seem particular comfortable at the center of attention, yet his delivery is so poignant that it is hard to look anywhere but at him. 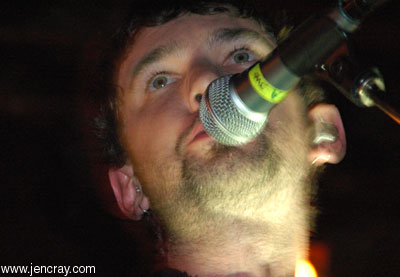 Members of the crowd were so into the music that you’d think this was the biggest band in the world. Every start of every song garnered immense applause, and sporadic indie dancing sprouted up throughout the floor space. Personally, I stood mesmerized at the front of the stage feeling the perfect amount of bass from Matt Miller (too much bass is way too hip hop for my taste), the driving pounds of drummer Tony Hajjar, and the dueling shreds from Ward and Davis. All of these factors reel me in, but it’s the vocals that take this band out of “good” and into “great.” Ward doesn’t even seem to realize just how important his voice is to the success of the music, which – of course – makes him that much cooler. 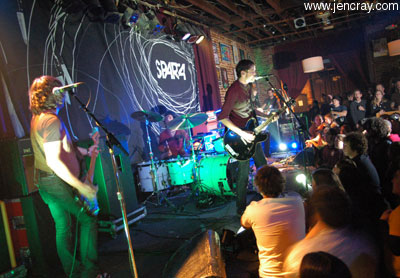 The band opened with “Untreatable Disease” and closed with “Air.” There was an encore, and there were insatiable cries for more even after the band took their final leave of the stage.

_To see more photos of this, and other, shows go to http://www.jencray.com_.