During their short tour opening for the legendary Joan Jett, Riverboat Gamblers invited me up to their dressing room for an informal chat before their set. They had just done two overnight drives in a row and were going on very little sleep (though you would have never known it after seeing their explosive performance an hour later). As bassist Patrick Lillard wrote out the night’s setlist and guitarist Freddy Castro nursed a cold and caught some shuteye curled up in a corner chair, frontman Mike Weibe graciously jumped right up to answer my questions and make me feel at home. 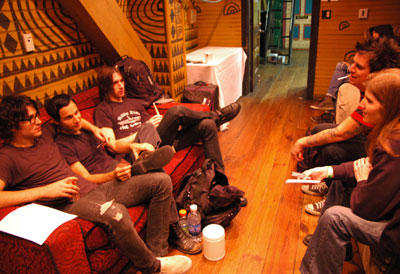 Before hooking up with Volcom you guys must have been hounded by labels. What was that experience like?

(Frontman-Mike Weibe) I don’t know if we were hounded. They were there, they were talking, but they were always sniffing the wind as to what they thought was going on in the industry and in the genre. They were always interested, but it was always like “we’re really into you guys but how are The Strokes doing?” Everything was based on how bands that were vaguely in our genre but don’t sound like us, so it was kind of lame and weird.

What made you decide to go with Volcom?

(MW) They were just really excited and they wanted to do it right then. They were excited, and not quite as industry creepy. There wasn’t quite as much “ya gotta get a hit single at all costs!” kind of vibe about them. It was more like, put out a good record… And they have good socks. I’m wearing Volcom socks right now, and they came for free. Capitol did not offer socks.

Who inspired you, as a frontman? I think that you’re one of the most exciting frontmen and I’m wondering where that performance energy came from.

(MW) Oh. Thank you! It didn’t really come from one place. A lot of it came from, because I used to play guitar in bands and I wasn’t very good so I moved to singing. It felt really really naked, so out of nervousness to be entertaining I started moving around a lot. It was kind of something- when you do something that people find entertaining you want to do it more and more. I don’t know that there was ever a certain frontman, it was really just the whole vibe of a band that was really exciting. I was never, like,”‘I’m gonna steal his cartwheels,” or whatever. And then people have said, “You stole that,’“and it’s not like I ever thought “I’m gonna swing my microphone like Roger Daltrey did.” It was just something I did once and it kind of kept going. I guess I was aware that he did it, but it was never a planned out “this guy did this, and this guy did this.” I won’t lie and say that I never saw videos of The Who or Iggy Pop.

With all of the chaos that goes on onstage, I’m sure you’ve had a lot of injuries. What’s been the worst?

(MW) Yeahhh.. Well, the worst actually happened to Patrick. I was swinging said microphone- I was a little more reckless with it back then- and it came back, and he was looking up and it broke his two front teeth. He had to get oral surgery. That was the worst, by far.

And you kept playing?

(MW) He swallowed so much blood, a lot of blood, and started passing out. Then earlier this year I broke these two bones (Mike shows me big scars on the back of his right hand) and had to get pins put in, and surgery and all that. Yuck.

I saw pictures of you playing CBGB’s with your arm in a cast, was that after that?

(MW) Yeah, that was post. I did it at the Bamboozle Fest in Jersey. That sucked, yeah. So then I did a whole tour with my arm wrapped.

I’d like to hear any stories you have surrounding CBGB’s, since it just closed down.

(MW) It was cool- I’d never even been there! It was pretty amazing, cause- ya know- a lot of East Coast bands had a lot of their early shows there so for them it’s just another show. For us it was really amazing because our very first show there was packed! People were going crazy! It was amazing because it was my first time there, to even be there, and to be actually playing there… It was everything I’d ever wanted out of a CBGB’s show. It was packed and sweaty, and beer being thrown everywhere. It was lived up to every expectation. I think, even if we had played there a couple years earlier it might not have been like that, we might not have had that many people there. It all worked out absolutely perfect. I remember, after we played, a friend of mine texted me and he said, “You played where Joey played.”

Were you a big Ramones fan?

(MW) Yeah, big Ramones fan. We were… not choked up, but there was a kind of weird emotion about playing in there. A weird feeling afterwards. I didn’t cry, but… no, I cried a little bit.

(PL) Awww, too cute for words.

You’ve gotten to tour with some legends- Rollins, X and now Joan Jett…

…has playing with these guys lived up to your expectations? Or do you even get to meet them?

(PL) They need us. (everyone laughs)

(MW) Yeah, they’ve always been really cool. I think we’ve been really lucky ‘cause you hear a lot about different bands being real jerks, but I don’t think that any of the bands we’ve played with have been anything but super nice and pretty enthusiastic about us playing with them. 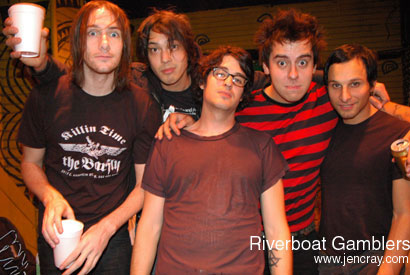 (Guitarist- Ian MacDougall) You guys… just put his head on his shoulder. (everyone laughs)

(PL) It’s just the crew that hates us.

(MW) It’s a real validation in what we’re doing when we get to play with bands like that. I don’t know, it’d probably be a better career move to be playing with some band I don’t like, like Good Charlotte or something. But this is way more fullfilling.

(MW) Yeah. That would hurt.

(PL) This is CC Deville, he started playing drums.

I first heard of you guys ‘cause I got a promo of your new cd from your publicity firm… I just kept playing it.

When I saw that you were coming through on the Rollins/X show I was like “fuck yeah!”

(TB) So you saw ‘em at the Rollins show?

Yeah, I shot that show.

(IM) That was a weird venue.

(IM)(points at Patrick) He almost got abducted by a man.

(TB) Oh is that the place you were telling me about?

(PL) Yeah, it was “more shots!” and then he tried to carry me out of there.

(MW) That was my birthday, right?

X came out and sang Happy Birthday to you.

(PL) I think X were probably the coolest band we ever played with.

(PL) We played soccer with them, and Exene wrote a play for us.

(IM) ..about some funny tour shit that happened.

(PL) They did, like, a little play and DJ Bonebrake came out and played a little Casio keyboard… They made these little visuals… They did this whole show for us, at our last show in Austin. It was awesome.

What’s up next after this tour?

(IM) We’re doing this thing called the Fun Fun Fun Fest in Austin. There’s gonna be a punk stage, an indie stage, a dance stage. On the punk stage it’ll be Negative Approach, Circle Jerks, us…

(MW) But we’re playing the dance stage. (laughs) No, but there are a bunch of cool bands playing. 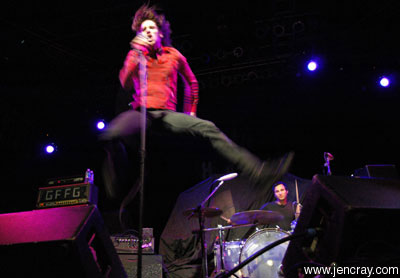 (To Tony) How new are you to the band?

(TB) Six weeks. I hadn’t been in a band for awhile, and I was kind of thinking about hooking up with someone to tour. Mike called me, like the next day, and I had been thinking about putting it out there. A couple weeks later we rehearsed..

(PL) He played in a band called Cool Cristine.

(MW) He played in- have you heard of a band called Hagfish? They had a record on Fat Wreck Chords and on London Records.

(TB) Every record was a different label.

(MW) That’s how ours will be, thanks to lack of success.

Seems like momentum is building. I’m started to see your name everywhere.

(MW) It’s a slow process, but it’s good. It’s like you’re always going forward… but that instant explosion of success sure would be nice!

To see live photos of Riverboat Gamblers go to www.jencray.com.