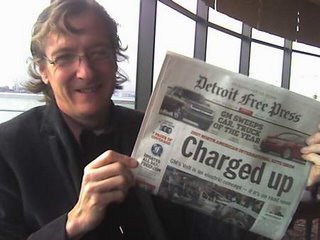 Wish you could solve most of the world’s problems in one fell swoop? Sounds ambitious, but when you set your mind to it; anything is possible.

Consider the ever-growing fact of global warming. Despite the naysayers, more and more scientists, researchers, environmentalists, physicists, educators, politicians and ordinary people are realizing that greenhouse gases, including carbon dioxide, methane and nitrous oxide, are preventing the reflection of solar radiation out into space, thereby raising the temperature of the world’s climate. About 20% of carbon dioxide emissions in the U.S. come from cars with internal combustion engines. Americans use 20.4 million barrels of oil a day and the cost is skyrocketing due to decreasing availability. Current cost is around $50 a barrel, but some say that an embargo by Iran or another middle-eastern oil producing nation could push prices as high as $262 dollars a barrel, translating into enormous increases at the gas pumps.

More realistic — and therefore more chilling — would be the scenario where Iran declares an oil embargo a la OPEC in 1973, which Browder thinks could cause oil to double to $131 a barrel. Other outcomes include an embargo by Venezuelan strongman Hugo Chavez ($111 a barrel), civil war in Nigeria ($98 a barrel), unrest and violence in Algeria ($79 a barrel) and major attacks on infrastructure by the insurgency in Iraq ($88 a barrel). – CNN 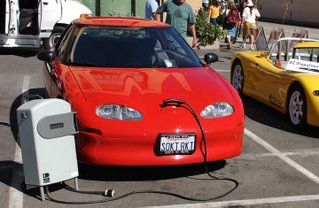 Even George W. Bush has admitted that America is “addicted to oil”, though his administration’s follies in Iraq and perhaps soon, Iran, all point towards a continued lust for the stuff, as well as attempting to plunder America’s wildlife refuges in search of more black gold. Still, he appears to be paying lip service to the idea of reducing America’s use of oil as well as ending our dependence upon oil from other countries.

Until now, Mr. Bush’s focus has tended to be increasing domestic energy production, and Democrats’ has been decreasing energy use. But both sides increasingly acknowledge that real energy independence requires both, and also requires government action to push alternative fuels. The twin threats of Middle Eastern upheaval and Venezuelan animosity should provide plenty of incentive. – Wall Street Journal

Now that the United States appears to be backed up against a wall – what are the options? The administration experts are touting hydrogen-fuel cells as the wave of the future, but research is showing that not only is the solution not cost-effective, but it is also years away from being produced on a mass scale. There is one solution that’s being put into use right under our very noses, and it’s gaining momentum in the face of a major oil crisis: Electricity.

I just finished watching the film Who Killed The Electric Car?, an informative and genuinely disturbing documentary about General Motors and their production of an electric car, the EV-1, which was discontinued and literally scrapped. Drivers of the car leased the vehicles, weren’t allowed to buy them and had to return them to GM when their leases expired. The cars were then taken out to the desert and crushed. A total waste.

It also turned out to be a huge mistake for GM, as Toyota picked up the ball and ran with it, introducing the Prius hybrid-electric vehicle, which has proved immensely popular. With gas prices rising at the pump, pollution worsening and climate change from global warming becoming more evident, the public has developed a taste not only for saving money, but for saving the planet as well.

Hybrids work by using a smaller internal combustion engine along with an electric motor, the two of which work in tandem to increase mileage and reduce emissions. In 2007, there are a number of hybrid vehicles on the market, including the Ford Escape, Lexus RX, Saturn Vue, Mercury Mariner, Toyota Highlander, Honda Accord, Honda Civic, Lexus GS, Toyota Camry, Toyota Prius, Saturn Aura and the Chevy Silverado Classic, just to name a few. Hybrids aren’t exactly electric cars. But they utilize an electric motor to help get better fuel mileage, which is a step in the right direction, both environmentally and economically. 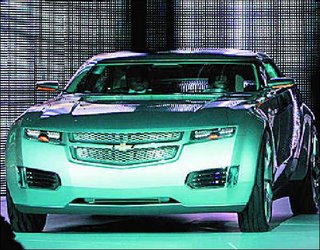 Many see the logical next step towards bringing back mass-produced electric vehicles would be the plug-in hybrids. These are hybrids with extended battery storage capabilities which you can plug into an external electrical outlet. These vehicles are designed to travel within certain ranges without engaging the internal combustion engine at all. Daimler-Chrysler has a Sprinter that it’s using commercially in Europe and Toyota has plans to corner the market on PHEVs. But it’s GM, those crushers of the EV-1, who have made a huge splash at an auto show this month in Detroit. Their flashy Chevrolet Volt was unveiled to applause and not a little skepticism.

“My next project may be called ‘Who Resurrected the Electric Car?'” Chris Paine — director of Who Killed the Electric Car? — joked moments after GM unveiled the intriguing Chevrolet Volt concept car Sunday at the North American International Auto Show preview at Cobo Center. – Detroit Free Press

Still, these seem like half-hearted attempts; compromises by the big auto makers to find a middle ground between all or nothing. While cutting back on gasoline consumption is ideal, it would be even more desirable to cut out gasoline consumption completely. The technology is here, just witness all-electric vehicles made by smaller car companies like Tesla Motors, Phoenix Motorcars and Zap! Imagine a world where the need for gasoline begins to fade and the money associated with it begins to free up, available for other uses. Imagine our environment beginning to heal itself. Imagine the wars for oil coming to a standstill. It’s all within our grasp. So what are we waiting for?

An organization called Plug-In America has arisen out of the ashes of what was the EV-1 program and is a clearinghouse for information, education and action, geared towards encouraging the public to demand action from policymakers and automakers. It was policy that first forced automakers in California to offer electric vehicles and it’s policy that could have a dramatic effect on influencing not only the auto industry, but also those in Washington who make the decisions that effect the entire world. Wouldn’t it be nice to take ownership of a future where we solve so many of the problems that plague this planet? Shouldn’t we be insistent upon a better way of life for us and for our children and their children? It might be hard to wean ourselves off of oil, but it can be done.