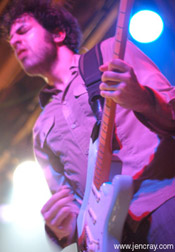 The Dears’ mighty guitarist Patrick Krief has stepped up to the plate to write, perform, and produce his very first solo effort. The EP, to be released through his website (www.kriefmusic.com) on February 20th, is a gorgeous collection of Beatles-inspired pop songs that reveal that Krief’s skills are not limited to the guitar. The aspiring solo artist was kind enough to answer some of my questions via email.

Why has it taken you so long to get up the nerve to be the frontman, to be the solo artist?

For years I had other people singing my songs. I spent years and years developing my guitar skills and other instruments. But never assumed for a moment that I could sing. So, my guitar skills got to this level, and my singing was so far below it that I had zero confidence (it’s still extremely low). The easy solution was to get other people to sing my words. But that scenario quickly became painful (mostly for the people singing my songs). So I just decided one morning; fuck it! I’m gonna do this. It took a lot of coaching, and I’m still working out the singing live thing (which is a whole other phase of building nerve)

You’ve obviously listened to a lot of The Beatles in your lifetime, and you can hear that influence in your song structure. Which Beatle is your favorite? What’s the greatest Beatles song? And if you could go back to that era, which year would you have wanted to see The Beatles play live?

Is it that obvious haha… I’d have to go with John (George a very close second). I think “Happiness is a Warm Gun” has got to be one of the greatest songs. It’s really hard to choose, like asking someone which of their parents they love more. But I’ll go with that one ‘cause every time I hear it I’m forced to ask myself, “How the hell did he come up with this??”

You played all of the instruments on the EP. How will you perform these songs live? Do you have a band lined up?

I do have a band lined up, they’re people I’ve played with for years, and they’re all great! Billy Anthopoulos (drums), Andre Bendahan (bass) and Roberto Piccioni (keys)

If you were to go out on a solo tour right now, what sorts of bands would you like to be on a bill with?

Anything good I guess, I haven’t really thought about it. Nothing too big though, I’d like to play small rooms.

I read that, unlike your mates in The Dears, you are not a fan of Morrissey. Having opened up shows for him, and being in the position of “non-fan,” what was that experience like for you?

Well I was pretty nervous, ‘cause at the time it was the biggest gig we had ever played. And seeing the bandmates so nervous didn’t help. Fan or non-fan, I was impressed and intimidated to be in the presence of a pop icon. I was also amazed that this guy liked our music enough to invite us out. The crowd of 3000 Morrissey fans impatiently waiting terrified me, so I got loaded on vodka. It was a fun show even though there were some moments (the ones you read about)…

That would have to be Ray Charles. I grew up having my dad blast his music in the car or around the house. One day my brother was like, “Pat, Ray Charles is coming to Montreal, tickets are $200,” which was ridiculously expensive for us, but we saved and bought three. We brought our dad, and the show was mind blowing. From the moment he stepped on stage, before even playing a note you felt there was a heavy presence in the room. His band was amazingly soulful. Contrary to many musicians, he didn’t get all cheesy with age, he had soul, and power. The show was one hour long; he left the stage, no encore. I had tears in my eyes for most of the show.

Maybe I’m still on a high from it, but I went to see Arcade Fire last night in Montreal, and it was devastating! Made me wanna give up music for a while. That band deserves to make it all the way to the top. They would have to be in my top concerts of all time as well.

Have you met any of your musical heroes? If yes, who and how was it? If no, would you want to? 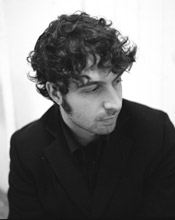 I haven’t met any. I’ve met many musicians I admire but none of my heroes (they’re almost all dead).

I don’t set out to meet my heroes though. I like to keep some mystery to the music I love. I don’t ever want to learn my favorite guitar parts, once I know how it’s done it loses some of its charm. I feel the same way about meeting heroes.

I love meeting people! So yes, I like being recognized, I’m glad to sign autographs or shake hands with people, it’s all part of the fantasy I had growing up.

I don’t mind photographs either. We’re there to put on a show, and the show’s purpose is to entertain. Some people are entertained by watching, screaming, making out or whatever, others by taking pictures. Either way, I’m focused on the music and making sure we’re putting on a great show.

Best band you’ve played with this past year?

Nine Inch Nails by far! Did not expect to be so blown away, I don’t have any of their records, but my mind was blown! They were headlining some festival (can’t remember which) in Europe, and we got to watch from the press area right in front. I felt like some vicious animal forced its way into my soul and shook me vigorously to the point of awakening something.

Last cd you listened to?