The Mesmers are not a gay band. There are no obvious lyrics about loving other men, nor does lead singer Michael Fitzgerald, otherwise known as Fitz, have an effeminate voice. Moreover, Fitz is the only homosexual member of the group. Neither exactly queer nor straight, the Mesmers find themselves not belonging to either community, which seems to be appropriate since their music resides in a Twilight Zone of its own. Their self-titled album flirts with ’60s Britpop, cinematic scores, pop-punk, and roots rock. Kyrby Raine spoke with Fitz about his role in Queer Nation and the misconceptions of being a gay frontman for a straight band. 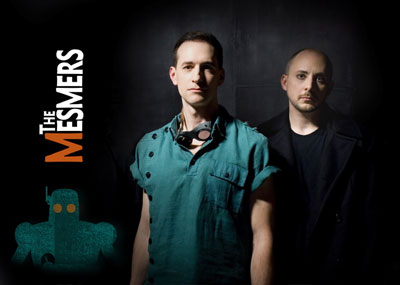 Because of societal taboos, it was once verboten for homosexual musicians, even in the rebellious world of rock, to come out of the closet. Do you think that is less of a case nowadays?

The landscape has definitely changed. Gone are the days when most people won’t even consider buying an openly gay artist’s work, but expectations remain. If I said I’m listening to a great black singer you’d probably assume soul or R & B, but not opera – which is unfortunate. Gay artists are similarly burdened. People still shrink from buying our work not so much because they have anything against homosexuals per se, but because they can’t quite wrap their minds around a gay artist not putting out some cliche disco-fest revival. It’s a challenge, and will remain so for a long time.

The rest of the Mesmers are straight but you are gay. Have the Mesmers ever been mistakenly tagged as a “gay band” because of it?

Not so much a “gay band” but there has been a lot of speculation as to who is and isn’t gay within the band. Sometimes it’s quite funny. For example, we once played this bar called Freddie’s and, as we always do, left a recording device on a table to catch our show for later analysis. Listening back to the tape we made a hysterical discovery: A bunch of guys had sat down at that very table, and not noticing the recorder, proceeded to give a running commentary of our entire show. They spent a huge amount of time trying to decide who was and who wasn’t gay in the band. It was funny as hell! They finally agreed that our drummer, Peter, was the homo and Jay and I were straight. The band (and Peter’s wife) has had more than a few laughs over that one.

There are gay musicians, such as Pansy Division, that are not only open about their homosexuality but are in your face about it while others don’t even reference it in their public image and songwriting. Where do you fit in?

I love Pansy Division – very underrated band. I treat the songwriting and band image very much the same as I do my real life: I don’t make an issue of it, but I don’t allow myself to be invisible either. It’s a fine line. You don’t want your music to be defined by who you sleep with, but at the same time gays don’t have the luxury of being totally silent on the issue. If you are you’re gonna get walked on – often unintentionally by people who don’t really mean any harm. I’m a bit lucky on the issue in that I’m not a sexually explicit lyric writer – and wouldn’t be even if I was straight. I have no problem using the “he” pronoun in a love song, but I’m not gonna be writing about “squeezing my lemon”, “masturbating in a magazine” or even wrapping my “dick in a box.” Just not my style.

Have you promoted the Mesmers to the gay community? Why or why not?

Personally we’d love to go more down that route but we’re a bit stymied as to where to start. Where are the gay venues that cater to rock bands? What gay press regularly covers musicians who aren’t divas and dance artists? I do feel there’s a big demand in the gay community for something other than the stereotypical norm but we’re having trouble finding a way to address that niche. So, other than me sleeping with David Geffen (which I’m always being joked about in rehearsal) we haven’t really figured this one out yet.

Tell me about the robot man. What’s his name and when did he join the Mesmers? What planet is he from, and what instruments does he play?

The current version is called the Mesmero 1000 and revealing its exact origin would get us into trouble with Homeland Security – so we won’t. The unit is too large to fit into most clubs but we will be taking his positronic engrams along with us in one of our laptops. He’s very useful for creating recursive rhythmic patters and sound effects to back up our playing.