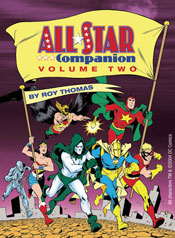 More academic text than comic art – All Star Companion Volume 2 is an appendix, an encyclopedia, a bibliography all in one. Supplementary materials of the highest order, shedding light on one of the most seminal series of the Golden Age (1930s-1940s). All-Star Comics ran for 57 issues, between 1940 and 1951, chronicling the adventures of the first modern “super team,” the Justice Society of America, comics’ then-biggest of the big guns. Hourman, Green Lantern, the Spectre, Dr. Fate, the Atom, Johnny Thunder and his Thunderbolt, the Flash, Hawkman and Sandman! All together! Most of yer fave super societies probably wouldn’t exist if it weren’t for this editorial brainstorm – Justice League, Avengers, X-Men, I could go on …. And the lineup shifted and/or was supplemented with even more heavy hitters – Wildcat, Mr. Terrific, Wonder Woman, Red Tornado, Starman, Dr. Mid-nite – hell, even Batman and Superman had a cup of coffee with the Justice Society.

These epic adventures had quite an effect on youthful comics fan Roy Thomas, the guiding force behind this and the first companion volume, who eagerly absorbed every single issue. But Thomas wasn’t content to just bag and board his issues. He threw himself heartily into comics fandom, helping out college professor Jerry Bails on his nascent comics fanzine, Alter Ego – which, incidentally, is the genesis behind this volume. Indeed, the Companion even expands on a few Alter Ego articles and theories. But it doesn’t end there. See, Thomas, like some sort of four-color Dr. Frankenstein, gave his childhood memories the greatest gift of all: he brought them back to life! When Thomas, then an editorial hotshot at Marvel Comics, made a surprising jump to DC Comics in 1981, one of his first pitches was to bring back the Justice Society of America. DC took him up on it! Thus began Thomas’s highly entertaining run on All-Star Squadron, a series set in World War II, featuring just about every major DC golden-age hero in a loose collective that protected the homefront from all manner of menace. The membership extended far beyond the original roll call of the JSA, and the series became Roy Thomas’s love letter to the “mystery men” of that era. Years later, that love hasn’t dimmed at all, with this new volume of the All-Star Companion as its latest expression.

The All-Star Companion is not intended for casual readers. Even more so than Alter Ego (Thomas’s other comic-historical venture), this is intended for older, hardcore comic fans whose tastes run more toward Golden Age and early Silver Age super-heroics or, as I’ve pointed out with a few other Twomorrows offerings, as a research tool for serious students of popular culture. This is no quickie “gee-whizz-comics” cash-in monograph; Thomas and the other writers on this project are obsessive completists (though NOT hoarders by any means) and committed chroniclers of their chosen chunk of comics history. Their reverence for and encyclopedic knowledge of the All-Stars of the Golden Age shine through on every page of this, even though this is more of a research tome than a looser, zine-style work. Articles are in-depth and require more than a passing knowledge of characters and stories. The first third of the book consists of essays on a variety of esoteric subjects involving the original All Star Comics of the 1940s; there’re a few on inconsistencies and controversies surrounding redrawn issues, even more on the unpublished “Will of William Wilson” story that All Star Companion I covered, tributes to the Junior JSA membership kits and the “Do It Yourself” science experiments that JSAers presented. There’s even one on superheroes created to hawk products (this far predated the infamous Hostess comics of the ’70s) – Captain Tootsie, anyone?

After that, the book shifts its focus to the Silver Age and (Modern Age) resurrections of the JSA and associated All-Stars, and baby, that’s where this book kicks in. This section is also what makes me torn about whether the book has potential for a more casual fan to pick up and enjoy, because it’s just so eye-catching, thoughtful and enjoyable, crammed full scrapbook-style, that I can see anyone getting hooked by all the strange trivia and explored references. Herein we have the two longest (and, as luck would have it, best) parts of the book. First there is an illustrated “who’s who” of every single character who appeared or was considered to appear (!) as a member of the All-Star Squadron – and it is absolutely amazing to see such an almost-encyclopedic gathering of golden-age heroes, famous and forgotten. And even though the text gets a bit clunky in points, the archival shots and diversity are just mind-blowing. But that’s only the appetizer for the section that’s pretty much the centerpiece of this volume: a full-on index to EVERY issue of All-Star Squadron (and follow-up miniseries utilizing similar characters by Roy Thomas in later years). It’s basically the closest thing to director’s commentary you’re every going to get out of a funnybook. Each issue is dissected in terms of plot and character appearances, along with the continuity notes and historical ephemera and references that informed each issue. I mean, I loved the All-Star Squadron issues as a young lad back in the ’80s, but to see all the work and deep thought and character excavation/archaeology that went into each and EVERY issue? Geezus! It’s a blast, it’s informative, it’s a great peek behind the curtain at a writer in his prime, at play with the characters that inspired him so much in the first place.