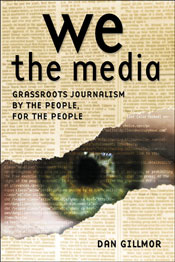 Things are constantly evolving; we, the public, who are affected by these changes, must learn to deal with the constant evolution of everyday life. One of the biggest examples of this is the idea of grassroots journalism, which Dan Gillmor has dedicated an entire book to.

In his recent release, We the Media, Gillmor explores the idea of grassroots journalism, which has seen a surge in recent years due to the advancement in technology (i.e. the Internet, computers, cell phones etc.) He takes examples from his own work in the field and includes others’ perspectives and recent examples in the news to target each of his main keypoints.

Oddly, as I started to read this book, I was reminded of what a lot of my professors had spoken about: the idea that with constantly changing Internet technology, the old ways of getting news (i.e. newspapers and magazines) could go extinct at some point in the future. The only remaining news factor will be the Internet, reigning victorious. Because of these technological advancements, everyday people can help write the news, be it through pictures and videos with cameraphones, using a Wiki page to write … or even your standard blog.

I mean, yes, these things are helpful … after all, journalists can’t be everywhere at all times, can they? However, Gillmor has a good point – if that is to be the case, then what will distinguish an actual journalist from the ever-growing grassroots journalism? As a professional journalist himself, it’s nice to hear someone from the field take a somewhat-positive outlook on the whole idea of change and offer some possible ways to prepare yourself for the changes that could occur in the future.

As I read through Gillmor’s thoughts and explanations, I loved that not only did he use the standard quotations from people who matter, but he also provided an extensive list of websites that dealt with some of the various topics within the pages of the Web directory as well as in his notes. It’s nice to be able to read something and then be able to visit the site and visualize Gillmor’s discussion points.

The only complaint I have about this book is that it reads just like every one of the journalism textbooks I had to buy while in college. It deals with a lot of similar information that has been told time and time again; yet, at the same time, it’s extremely valuable to aspiring journalists. It was so much information to take in and think about that it was only possible to read portions at a time. However, Gillmor has tackled a serious topic I think needs to be taken into consideration – and fast. There will be an evolution – Gillmor even refers to it in his introduction as “a modern revolution…” with the continuation of grassroots journalism. Don’t be scared; embrace it.