A smokin’ hot go-go dancer with a machine gun for a prosthetic leg.

That’s all it took to plant me in a screener’s seat. The fact that Grindhouse is a double-feature homage to 1970s B-movies directed by homage-kings Quentin Tarantino and Robert Rodriguez was an afterthought. The teaser that the double header’s second flick features Kurt Russell and a Dodge duel – “Challenger vs. Charger” – was a bonus, as was the fantastic soundtrack. 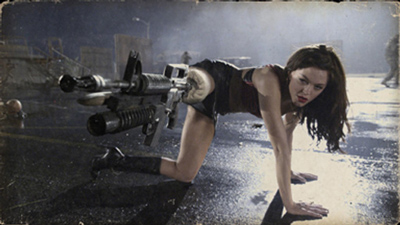 Ultimately, Grindhouse’s appeal boils down to Rose McGowan and a pegleg that spits lead and high explosives. She stars as Cherry in Rodriguez’ character-packed “Planet Terror,” an expectedly hip and hilarious gore-fest that makes the second half of From Dusk Till Dawn look like an Academy-Award effort. It takes real talent to make a great movie by deliberately directing a bad one, and Rodriguez has that sort of skill to spare.

To describe the shock-schlock story in any great detail would be a waste of ink, as its careening plot outline would resemble something created on a Spirograph by a seizure-stricken epileptic. “Planet Terror,” a huge nod to George Romero, involves a rogue military unit headed by Bruce Willis. These bad guys butt heads with a twisted biochemist (Naveen Andrews, Lost) who fastidiously collects the testicles of those who displease him. The source of their discourse is a highly contagious, flesh-melting bio-weapon that turns it’s victims into – you guessed it – zombies. Caught in the middle of this bloodletting fracas are the inhabitants of a small shithole town, primarily: Whacked-out Dr. Block (Josh Brolin, looking like his dad every year), his cheating, anesthesiologist wife, Dakota (Marley Shelton); Wray, Cherry’s ex-boyfriend and the town’s mysterious bad-boy (Freddy Rodriguez, Six Feet Under); the obligatory oblivious sheriff (Michael Biehn), his brother, the town’s greasy BBQ restauranteur (Jeff Fahey), and an assortment of supporting actors from the Tarantino/Rodriguez talent pool, including Michael Parks (essentially reprising his unforgettable role in From Dusk Till Dawn), and Tarantino himself. 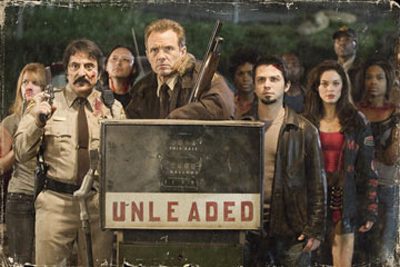 The splatter-fest has only one minor flaw. Given that many aficionados consider gratuitous nudity (aka “sexploitation”) a key element of the grindhouse genre, it’s curious that T&A are in short supply in this double bill. Yes, the camera lecherously lingers on guest star Stacy “Fergie” Ferguson’s fetching bosom – and McGowan and Rodriguez have an impromptu, everything-but-the-goods romp – but the only birthday suits to be found are in the accompanying film trailers (more on those later).

Given that melting male genitalia are graphically depicted, it seemed strange for Robert Rodriguez to draw the line at unharmed female flesh.

Tarantino’s turn at bat, Death Proof, is an unabashed cinematic ode to classic car chase films. Like Planet Terror, the film is peppered with enough lines and splotches and missing reels to resemble a worn-out, re-edited drive-in cheapie, circa 1974.

But don’t let Tarantino’s tricks fool you. While remaining low-budget in appearance, a noticeable lack of campiness puts this wild ride in sharp contrast to Rodriguez’ offering.

Death Proof is essentially two vignettes, linked together by the deliciously evil presence of Kurt Russell (!) as Stuntman Mike. Both scenarios involve gaggles of attractive women who eventually face danger on the highway – courtesy of Stuntman Mike – after quite a bit of girl-talk that sets up the climax. 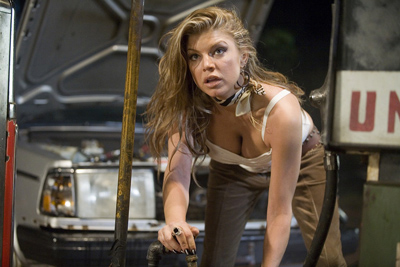 It’s in the movie’s first act that Tarantino takes his only misstep. The “girl talk” among Sydney Tamilia Poitier, Jordan Ladd and Vanessa Ferlito is not Reservoir Dogs-style witty, or even interesting. The trio’s eye-opening fate (Rose McGowan also appears as a fourth potential victim) is not enough reward for sitting through the preceding dialogue; Death Proof’s first ten minutes provides a good time for a bathroom and/or smoke break – Grindhouse is three-and-a-quarter hours long, after all.

Thankfully, the second act more than redeems the first, making Death Proof the most enjoyable of these two highly enjoyable flicks. Tarantino has said that he set out to make the ultimate chase scene for this movie, and he almost succeeds. Zoe Bell, Rosario Dawson, Tracie Thoms and Mary Elizabeth Winstead play friends who all work in the movie industry; two of them (Bell and Thoms) are self-described “gearheads,” well-versed in car classics such as Vanishing Point and Dirty Mary Crazy Larry. While on location somewhere in Tennessee (actually California’s Santa Ynez Valley), the gals embark on a dream joy ride in a “Vanishing Point car,” a white ‘70 Challenger. 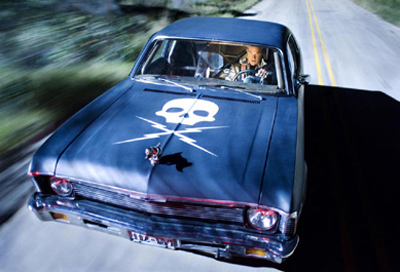 Surprisingly, this second group of actresses – whose banter is much more entertaining – manage to outshine the Mopar muscle. Most notable of the bunch is Kiwi stuntwoman Bell, who plays herself (she doubled for Uma in the Kill Bill_s and for Lucy Lawless in the _Xena series). Bell’s performance is simply awesome, setting Death Proof apart from most of it’s bump-and-go predecessors in terms of inventiveness. The cheer-prompting, CGI-free battle between the gals and Stuntman Mike’s mean, black Charger is one crazy nail-biter; after the credits rolled, my friend Tim turned to me and said, “I’ve never sweated watching a car chase before.” I hadn’t, either. 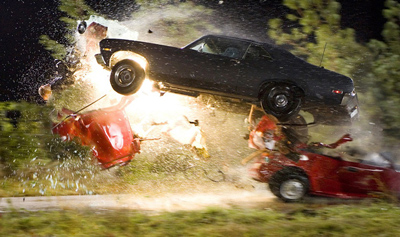 Rounding out this sensational two-for-one experience are outrageously, unbelievably authentic-yet-faux film trailers shown before Grindhouse and during the intermission, three of which were “guest directed” by Rob Zombie, Edgar Wright (Shaun of the Dead) and Eli Roth (Cabin Fever, Hostel). My favorites are the Zombie-created Werewolf Women of the S.S. (with Nicholas Cage as Fu Manchu) and Machete, which stars Rodriguez’ favorite knife-thrower, Danny Trejo. The latter movie’s slogan, “They just fucked with the wrong Mexican,” says it all; word has it that Rodriguez might shoot an actual Machete film.

In retrospect, it’s amazing to think that fabulous drive-in and seedy-theater staples were once effortlessly cranked out in a matter of weeks (hence, “grindhouse”). Some of them, as I recall, were almost as cool as this carefully planned extravaganza. I’d forgotten how much fun bad movies could be.