The Rocket Summer, Melee, Nothing Ever Stays

It was announced sometime in March 2007 that the Early November would be going on indefinite hiatus after their tour was finished; their very last show would be an appearance on 2007’s Bamboozle. Their last “hometown” show would be at the Trocadero on April 14.

Tickets sold out, plain and simple–thus another “last” show was added for the following day. Days before the show, due to a family ememrgency, shows were cancelled–yet the band still decided to play the Philly shows. 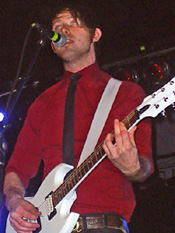 Brittany Sturges
Nothing Ever Stays

The day finally came. Fans waited outside, anxious. Anticipation lingered in the air as they stood in line, hoping for doors to open. It had been a long while since I had seen the line actually stretch down the block and around the corner.

Once inside, kids packed in, trying to get as close to the barriers as possible. At 7:30, California’s Nothing Ever Stays took the stage. They started off strong, seeming to have great potential; by the third song, however, they started to sound like every other emo band I’ve ever listened to. The bar crowd looked bored out of their mind, while some of the kids on the floor were trying to get into it.

Melee followed suit with a very upbeat performance. The crowd started crowd surfing and singing along. Lead singer Chris pounded on the keyboards, even standing on them at one point. The band reminded me of a poppier version of the old-school Something Corporate (back when they had released Leaving Through the Window). At times, their music was a bit overbearing for the vocals, but aside from that, they performed very well. I made a note to check out their new album, Devils & Angels. 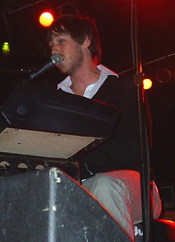 Next up was the Rocket Summer. I had heard the name briefly, but had never heard the music. The fans went CRAZY; the screams that erupted reminded me of none other than the boyband phenomenon of the 90s. The music reminded me of it as well. As the fans jumped and sang their hearts out, I tried to inch my way away from the speakers, but with no such luck. After what seemed to be one of the longest sets of my life (I was done with it after the second song), it was finally time for the big show.

With “The Boys are Back in Town,” blaring from the speakers, The Early November took the stage to the fans’ delight. Film crew and photographers packed the photo pit, nearly avoiding the many fans being brought over the barrier by security. 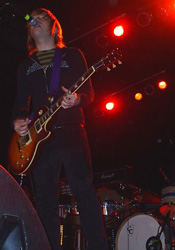 “Philly has always been absolutely amazing,” said lead singer Ace Enders. Considering this was their “going out of business tour,” the fans (from both Philly and Jersey) screamed at every word. The band could have stood onstage, read out of the phonebook and it would have probably been the same response. Extra security came to help out with the many crowd surfers; the kids were dancing and flinging themselves around.

A bit into the set, Ace took some time to explain about the previous canceled shows. He had just experienced a death of a close loved one and went on to perform a slow acoustic song to her. It was a complete 180 from the show thus far, and yet at the same time, really meaningful. The fans went about it really well, encouraging him to keep singing the lyrics. It was very heartwarming.

After that, the show went back to the up-tempo pace, full of group sing-alongs. At one point, Ace’s dad decided to get in on the fun and crowdsurfed his way to the front. Was there a crowd favorite they didn’t play? It didn’t seem like it, except for “I Want to Hear You Sad.”

With their last three songs, Ace announced that the band would “get crazy” like they had done back when they played the small gigs in the VFW halls. After the third song, they said goodbye.

The crowd, however, was not as willing to let go. Screams of “one more song” echoed throughout the building, accompanied with feet stomping and hand clapping. The band emerged with one more song, with no doubt in my mind what it would be. Sure enough, the familar notes of “I Want to Hear You Sad,” blasted from the speakers as the band gave their all for the performance.

After a true and last goodbye , TEN and their fans departed. Some looked back at the stage, as they waited ever so patiently to get out of the venue and head home. It was a great show–better than the last time I had seen them–and I was glad I had gotten to be a part of one of their last shows.