The psychedelic fuzz began to flow from the speakers. Fans on the floor and those who hung their heads over Subterranean’s wraparound balcony drank in the thick reverb as it filled up the venue’s three levels. The melodic Saturday night enchantment began around 9:30 and held fast long after 2am. 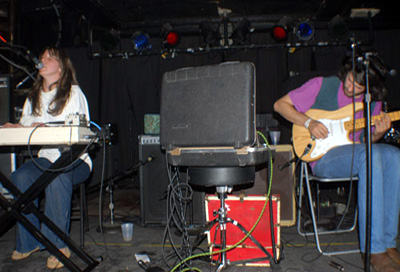 It all started with opener Single Man Affair, a Chicago sextet that brought the Pink Floyd riffs and added their own touch of ethereal percussion and spontaneous blues guitar jams. The trio of guitars traded pulsing rhythms for rolling fuzz. SMA was never predictable and halfway through their set I had a hunch it was going to be one of those shows that conjure up random thoughts from days, months or even years ago, a show that would force me to get lost in my own thoughts, amidst a sea of strangers sharing the same experience. 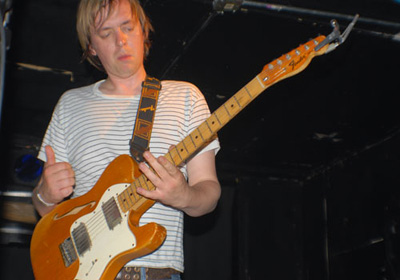 The night got even better when a few songs into their set, vocalist/organist Victoria Legrand of Baltimore duo Beach House whispered into the mic, “If I melt into a pool of water, drink me.” Their set dripped with trance-inducing organ riffs and was far too short. Listening to Beach House was only half the fun, though. Donning a t-shirt and vest with worn tempo-keeping cowboy boots, guitarist Alex Scally provided the framework around Legrand by starting each song with a reach into an open suitcase that sat on a chair between them. Like a musical sleight of hand magician he pulled everything from a harsh electro thump to a quaint and distant rim shot as his guitar meandered from Hawaiian folk to psychedelic blues.

A good band can overcome a night of poor sound and still play a solid show. The night’s “I-Need More-Guitar-Bass-Vocals-In-My-Monitor” Award goes to The Clientele. At first I thought it was me but then frontman Alasdair MacLean got frustrated and requested that the sound guy give the band the same levels they had during sound check. When MacLean didn’t get what he wanted, he looked at keyboardist/violist Mel Draisy and took control of the show regardless of the faulty sound. The Clientele worked their song catalog front to back. First it was tracks from 2007’s God Save the Clientele then as the set rolled on the screaming fan behind me got his wish when during the encore the band dipped into tracks from earlier EPs. 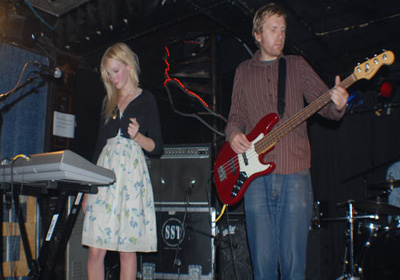 Colleen Catania
Mel Draisey and James Hornsey of the Clientele

You can’t deny the Clientele’s love for 60’s Brit-pop. Their purely creative take on the classic melodies grows on you. MacLean and his mates never compete against each other but never fade in to the background either. What you get is a set that leaves you floating on a musical high, a little separated from yourself and ultimately whispering underneath your breath, “Damn that was a good show,” as you watch the band pack up their gear and the crowd heads for the exits.