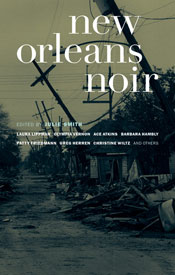 When you think of New Orleans, a host of images come to mind. There is the unbridled revelry of Mardi Gras, the joyous noise of jazz bands, the grandeur of the Garden District and the allure of the French Quarter. New Orleans also conjures images of political corruption, inequality and poverty. This is a place where the bumper sticker “Vote for the Crook” isn’t a joke. New Orleans is a a place that proudly declares its outsider status. It is a place where Cajuns, Octoroons and Voodoo priestesses populate the history books and imagination. New Orleans is the living embodiment of the concept of Noir fiction.

Noir is most closely associated with the hardboiled detective movies of the 1940s. These movies focused on the darker aspects of society. The protagonists are often ordinary people caught up in circumstances. Noir stories are often morally ambiguous with the line between good and bad smudged almost beyond recognition. Noir is messy, like the real world.

New Orleans Noir is the latest edition in Akashic Books’ geographically focused collections of short stories. Julie Smith, the author of the New Orleans-based Skip Langdon and Talba Wallace mysteries, is the editor of this collection. She organized the book into two sections: “Before the Levees Broke,” a wide ranging collections of tales set before Hurricane Katrina, and “Life in Atlantis,” which focuses on the aftermath of the storm. Each story is set in a specific neighborhood which highlights the diversity of the city. This device ensures that readers get to know the New Orleans that lies beyond the tourist trail.

“Before the Levees Broke” gives a broad picture of New Orleans’ sordid history. The gritty past is brought to life by Barbara Hambly’s “There Shall Your Heart Be Also.” The story is set in the area known as The Swamp, where a free black doctor tends to the down and out. The story is a great tale of betrayal and double crosses that illuminates a bit of the city’s less romantic past. Jevey Tervalon’s “The Battling Priests of Corpus Christi” revolves around racism and corruption in a spellbinding way. James Noland’s “Open Mike” takes us to a part of the French Quarter off the beaten track where poetry might be motive for murder. Laura Lipman’s “Pony Girl” shows a frightening side of Mardi Gras in the Treme. Lipman’s story is a good reminder that things aren’t always what they seem.

“Living in Atlantis” plunges us into the chaotic aftermath of Hurricane Katrina. Maureen Tan takes us to the flooded Village de l’Est, where Vietnamese immigrants are forced to take matters into their own hands when there is only the law of the street. Likewise, Christine Wiltz tale of opportunism and greed in Lakeview also finds people pushed beyond their limits and forced to do things they would never have considered before the storm.

Noir tales are often morality tales at heart. Julie Smith’s tale, “Loot,” is a twisted tale of loyalty and corruption in the Garden District. It seems like the good are punished and the bad prosper while the world falls apart during the storm. Whom can you trust when the world has gone crazy? Ace Atkins shows how difficult that question can be to answer in Angola South. His tale follows an outsider who came to New Orleans to help in the aftermath of the storm. A National Guardsman tries to do the right thing in a semi-lawless town, but even good intentions can get lost in the confusion.

New Orleans Noir is a great collection of stories. While I’ve given a few lines to the stories that had the greatest impact on me, every story in this book is good. The writers tackle some thorny issues in stories that are hard to ignore. New Orleans Noir does the city’s rich literary tradition proud.