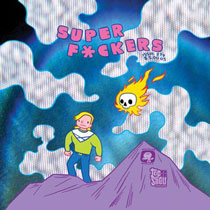 James Kochalka, best known for more cutesy/poignant fare like his American Elf sketchbook diaries and whimsical masterpieces like Monkey vs. Robot, really lets his id darkside fly with this exceptionally rude masterstroke. In full-on gonzo mode, Kochalka unleashes the superteam Superfuckers on the world, an unholy hybrid of Angry Youth Comics shock-and-appall, classic National Lampoon sacred cow slaughter, Real World-style narcissism and selfishness, and big-name super collectives like the Avengers and the Justice League of America. While clearly a bareknuckled satirical swipe at the big-box superhero comics with which Kochalka has to share shelf space in fine bookstores and comic shoppes near you, Super Fuckers rises triumphantly beyond mere venom and bile to vile comedy godhead.

In Kochalka’s twisted vision, the heroes/members of the Super Fuckers don’t have much time to fight crime as they’re too busy fighting and/or fucking one another, gossiping, taking drugs, calling each other names (“Mr. Gaylord Retardo”), pissing on the heads of potential recruits from a second story window (“Weather Report! It’s raining piss!)” or altering reality to make a team-mate’s tits bigger. What makes Super Fuckers even better is that Kochalka renders all these terrible things and terrible people in such a gosh-darn cute style that you can’t help but “awww” even as you laugh out loud when, say, Jack Krak, clad in a tutu (“these are man ruffles”), gets high from licking his bloblike team-mate Grotus’s slimy secretions off his bed, or when a clone of Orange Lightning and another teammate rush to his gravesite to… dig up his grave and use his “skull as a MOTHERFUCKING bong!” The characters are impossibly adorable, visually speaking, all rudimentary super-attire and sweet smiles, which makes their scatological rotten-ness all the more hilarious. And make no mistake, Super Fuckers is the funniest thing I’ve read all year. It’s irreverent, fearless and truly, madly, deeply offensive. Don’t be an ass, buy it. Shit, buy two. Don’t collectors do that sort of thing?