The Skate Park of Tampa is a logical place for Chris Nieratko to hold a book release party. Nieratko edited the Larry Flynt-published skate punk magazine called Big Brother. Chris was one of the creators of Jackass, but his tendency toward excessive boozing and pill-popping made him more suited to the literary life than the crazy stunts of Jackass.

The “reviews” in Skinema only occasionally reference the movies they’re supposed to be about. Chris uses the videos as a jumping off point for brutally unvarnished stories tales of excess and debauchery. Where other people start editing themselves when the stories start to get embarrassing or cast the writer in a negative light, that’s where Nieratko begins. A review might turn out to be a tale about watching a girlfriend OD or another girl having anal sex with a neighbor because Chris is on the road too much. The final chapter, “Even Losers Get Lucky Sometimes (my poor wife)” details Chris’s romancing his wife Crissie. Most women would be appalled at the details of their personal life that Chris casually shares with the world. Then again, if you’re going to marry Chris Nieratko, you definitely know what you’re getting into. 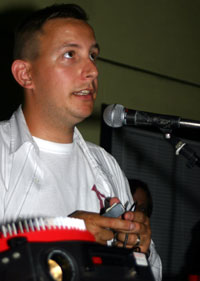 Maybe it was because so many people in the audience already knew the stories being told, but Chris’s delivery was kind of flat. It felt more like a rehearsal than a performance, Chris told road stories about best friends beating the crap out of each other, a disastrous interview with Luke Campbell and a cautionary tale about Brazilian streetwalkers. I had fun, It was like hanging out with buddies sharing their vacation stories. Of course, Chris has better, crazier travel stories than any of my relatives. I suspect that given a bit more practice and with the right inspiration, Chris could make this slide show as entertaining and cringe-inducing as Skinema.