Sherwood, The Higher, The Forecast

Fans littered the street, waiting anxiously for the doors to open, while security kept watch. For a Monday night performance, Motion City Soundtrack did well. Okay, better than well – it was a sold-out show. As I entered the crowded Fillmore at the TLA, I kept wondering why the Minnesota-based band didn’t opt for a larger venue; after all, last March, they sold out the same space. This time, they didn’t even have a new album released, yet that didn’t matter to their dedicated fans.

Up first was The Forecast. As they started to play, my mind kept thinking “not bad.” They had tight riffs and the guy that was singing had a decent voice. However, their female vocalist/bassist, Shannon Burns, was singing a bit too high; her voice sounded strained almost.

Following the Forecast was Las Vegas band, The Higher. The Epitaph pop-rockers put on a pretty good show and had a bunch of fans up front dancing. I don’t know what it is exactly with Las Vegas bands – the charm, the pop-rock sound, etc. – but whatever it is, it works. The Higher were no exception. Afterwards, kids flocked upstairs to snatch up CDs, as the crowd pushed their way further up towards the stage. 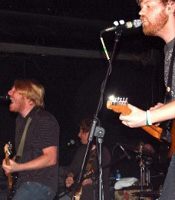 Sherwood took the stage soon after. This California pop-rock band has had some great things happen for their career (signing to Myspace Records, having their songs played on cable television, etc.) and opening for Motion City Soundtrack is just one of those opportunities. Having talked to Dan (guitar, vocals) and Joe (drums) beforehand, I was looking forward to their performance. Their fans made themselves well-known, singing along to every word. Nate Henry’s voice was perfectly on-key. As I stood in front of the amp, I thought that they were probably one of the best bands to have opened for Motion City Soundtrack.

Speaking of, it was finally time for MCS to take the stage. With their soon-to-be released record, Even If It Kills Me not out until mid-September, the pop-rockers still hit the road and their fans were not going to miss it, album or not. 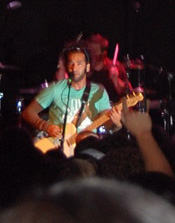 Opening with the crowd-pleasing “Capitol H,” the whole place was jumping and singing along. While I had been waiting for the set-up, I wondered if they were going to dedicate a good portion of the set-list to new songs. While playing a few new songs from the album, including “Broken Heart” (the first single), the band made sure to include old-time favorites from their previous two albums. Front man Justin Pierre gave a priceless performance with vocals; probably one of the band’s best performances to date.

The band decided to end with “The Future Freaks Me Out.” If you have never seen Motion City Soundtrack, then you need to understand that this song is perhaps their most powerful with the crowd (it’s also one of their catchiest and easily gets stuck in your head). When the opening notes started, the fans went crazy, jumping up and down with the beat. The song has a somewhat fast-tempo to begin with, but something was off tonight. As the song progressed, the beat started to go faster and faster. It seemed as if the band had been caught up in the whirlwind of the audience excitement and had lost control of the song.

Despite the little mishap, Motion City Soundtrack still put on a must-see show for all those who love a little synth in their music. If you missed your chance to check them out this tour, don’t worry! After this, the band will be headlining a tour with special guests Mae, Anberlin and Metro Station.