A Hero From a Thousand Paces, Desoto Jones, The Hint, A Cursive Memory

After a long awaited CD release, fans of The High Court weren’t going to let anything ruin this release show–even the weather.

With rain pouring from the grey skies, they waited outside patiently in huddles. When the doors finally opened to the upstairs balcony, fans flocked inside to escape the downpour and to acquire the best spot in the house.

The High Court is a South Jersey based-band who have caught the eyes and ears of fans in the Philadelphia area. At each show, their fanbase increases–and with good reason. The band, signed to I Surrender Records, has a power-pop feel that will imprint itself into your memory. At each show, their fans immerse themselves in the music. As they hang onto barriers, they sing along with every single word. 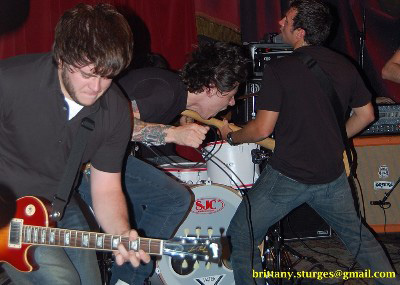 Trying to escape the cold air from the air conditioner, I found myself crammed on a top step stage right. The Trocadero balcony was bursting with kids; it grew hard to move as the night wore on. I don’t know why the main concert hall wasn’t used, but regardless, fans settled in for a cozy couple of hours.

The Hint started off the show. Having played some dates on this year’s Warped Tour, I was excited to hear what they had to offer. Their sound has a pop base, with threads of new wave woven in. “Kiss Kiss” was perhaps their best number; though sadly their performance was a bit bland for the night; it was good, but nothing really stood out about them. However, the Maryland quartet was able to win over some of the fans in the crowd, getting them to sing and dance along. 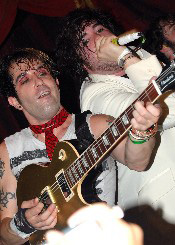 Brittany Sturges
A Hero From a Thousand Paces

Desoto Jones followed, with a new line-up and songs. Currently working on their upcoming 2007 release, Aurora, the band put on their best performance. With hard-hitting riffs and vocals that bleed intensity, the South Jersey band stepped up their game. The new line-up, including Justin Staszewski on drums and Chris Gill on guitar, seems to be a perfect fit. The band was tight; the music was on target and they had a decent crowd response (sounding nothing like any of the power-pop bands gracing the bill). If this performance was any indication of what is to come, you’ll be hearing their name everywhere.

In between sets, the crowd shifted, as some people attempted to hit the merch stands, while others pushed their way to the front-row action. A Cursive Memory was up next; like the Hint, I had never heard of them, but was eager to listen. With a California pop sound, the band (currently on tour with the High Court) had me slightly intrigued. They had a good stage presence and were able to get the crowd dancing along. Meanwhile, I stood in the back trying to get a feel for them. While I admit that indie pop-rock is a guilty pleasure of mine, I’m still on the fence with this one. 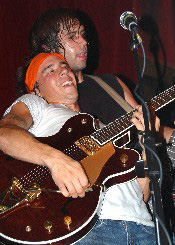 A Hero From a Thousand Paces took the stage. Though yet another Jersey band on the bill, these guys set themselves apart with their “glam” appearance, from the make-up to the attire. While their look is reminiscent of My Chemical Romance, circa 2004, their sound leans more to the indie-rock crowd. They may dress to impress, but it’s their music that hits home with their fans. As they played crowd favorites off their latest release, Mistakes, fans belted out the lyrics to the song. After their set was over, the crowd tried to plead with them for one more song.

The High Court fans, however, weren’t going to have their moment delayed any longer. The quintet took the stage, welcomed by female shrieks. As the band started to play every track off of their debut release, Puppet Strings, the crowd jutted towards the stage.

Again, I reference the size of the venue. While I’m sure there was good reasoning to pick the balcony, the band seemed constrained on the tiny stage. Meanwhile, the fans were on top of one another. However, despite any limitations, everyone made the best of the situation. The band proceeded to play every song, in its entirety. Vocalist J.B. even took a solo moment to perform “Heaven on the Horizon,” something that doesn’t often occur.

Afterwards, the rest of the band returned to the stage to complete the rest of their set. There was even some crowd-surfing from bassist Lou Cuello. With intense energy and charisma, the High Court gave a note-worthy performance for their CD release.