Grace Potter and The Nocturnals, ESG, Betty Lavette, Psalm One, YO! Majesty, Suffrajett

For the last five years Estrojam has grown in size and influence as a Chicago-based collective of the female creative consciousness spanning the pallet from the arts to the business world. It’s a non-profit that began five years ago, organized and created by a team of women headed by recognized and respected activist T. Khyentse James, who runs Estrojam on the moto; “To inspire women to pick up a guitar, a paintbrush, a power tool, a mic, some drum sticks, a video camera and an attitude that anything is possible.” 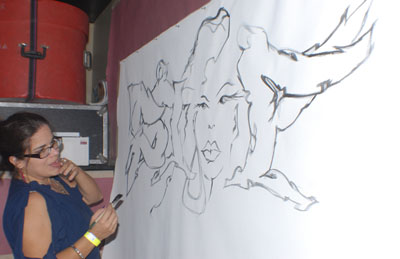 The festival kicked off on Tuesday night with comedian Margaret Cho performing each night as several other female artists performed at various northside venues. My submersion began on Friday at the Abbey Pub and ended on Saturday night at the Metro.

Fans sipped beers and roamed from the magazine sponsor tables as the night started with a blank canvas. Off stage-right, two artists created paintings as the DJ laid down preliminary beats and Chicago rapper Rita J got heads bobbing with her frizzy fro and funky flow, adding sensual gyrations initiated by a backup dancer who warmed the stage up a few degrees. 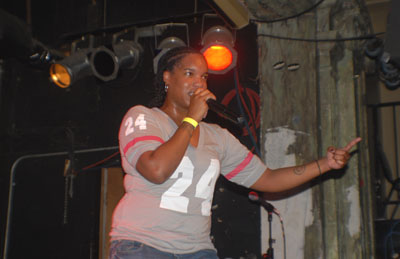 The creative excitement was all around as I bounced my gaze back and forth from the live art being created on my left and the night’s next act and rising female rapper Christalle Bowen (aka Psalm One), who tore through tracks from her crisp and furious 2006 album Death of Frequent Flyer. Psalm One utilizes her life experiences as a former food chemist when she mixes a confidentswagger, a dab of defiance and witty punchlines all into one dynamite delivery. Her lyrical prowess falls into the anti-bling category and would definitely put smile on faces that stem from her South-side Chicago roots, as fellow Chicago emcee Long Shot jumped onstage to interject his lyricaldictorian verses and harmonious rhymes. 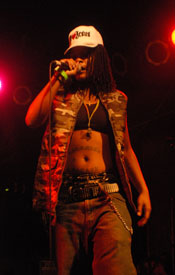 Psalm One slyly asked all to “come a little closer and I’ll tell you some secrets,” and then lured the crowd into a call-and-response that shook the workweek cobwebs from the crowd, freeing them from their Friday funk.

Once the crowd was loose it was time to see where Psalm One has mined a bit of her inspiration, as Philadelphia emcee Bahamadia threw down a set that was drenched in funk and old school beats, samples and sparkling speed rapping. Dressed in an Adidas black and white-striped jacket, she grinned with pleasure as she traveled through a medley of songs from a canon of hip hop females (and some gents) who have inspired her vintage “yes, yes, ya’ll” throwback style.

Now what happened next is something I enjoyed for the sheer fact that it was a raucous club banging set. Yo! Majesty is one part southern crunk, one dose shock rock and all parts aggressive, militant and rump thumpin’ controversial rap. The Tampa, FL duo are notorious for putting on outrageous live shows and well, this one nearly got them a night in a Chicago jail. Halfway through the set as Shunda K dropped the shock-rap rhymes, c-vocalist Jwl, after dousing herself in water, ripped off her baggy t-shirt and erupted in to a roaring bare-chested romp as the DJ pushed the intensity of the electro beats faster and faster. The crowd erupted in cheers as venue owners got nervous.

Jwl slapped two x’s of duct tape on her nipples and the set continued and eventually gave way to Brooklyn quartet ESG who were playing their final show for the Estrojam crowd.

Concert organizers wept, while fans on the floor and in the balcony wiggled to the simple melodic progressions. The entrancing set was a sort of aesthetic antidote to Yo! Majesty’s set that will take months to fully settle on my brain. 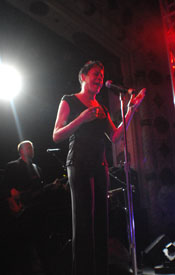 On Saturday night, the grounds of the Metro were covered with a building buzz as fans rolled in and soaked up the gritty garage-blues rock of openers Suffrajett. The set was raw and seemed pieced together. Right off, the guitarist said, “We really didn’t need a sound check,” and a fan shouted back “Soundchecks are for pussies!” I thought both were half right and the steamy growl of Suffrajett’s frontwoman was a nice match for her electric rock-violin work.

Before Betty Lavette turned the Metro into an intimate one-room cathedral, one of the weekend’s best non-musical performances hung in the air in front of me.

The night’s emcee Jessica Halem was spot on when she summed up the festivities as “a week long highlight of some of the great things that women do.” I watched in amazement as aerialist Brandy Dew hung and skillfully twisted and untwisted herself from a long piece of thick white cloth that was draped over the silver scaffolding. Why don’t more rock shows make use of in-between set entertainment like this?

Betty Lavette is a diva with drive, soul and loads of persistence, and as she mentioned, has a faithful following in Chicago. She thanked the crowd for the strong record sales in Chicago that far outweighed sales in her and Motown’s hometown of Detroit. 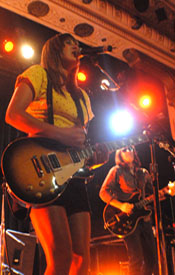 Via songs from her latest album Scene of the Crime, Lavette drenched the Metro with a soul-penetrating croon that was lifted by a quintet of tight players, turning the indie-rock Mecca into a cathedral of emotions. Her set peaked when she sat down onstage and dropped a curtain of deep sorrow, extreme depression that was both cathartic and made some fans uneasy. I soaked it all up and went into Grace Potter and The Nocturnals set feeling quite sanctified.

The rumors of Grace Potter’s soul-resonating skills on the Hammond B-3 are true. Along with the slowly building gospel-tinged rock and roll numbers, the Vermont native and her sunglasses-donning Nocturnals are just as capable of cutting loose with a country folk tune that did, in fact, bite some Metroites in the ass and got them linking elbows and swinging each other around while some more uptight fans just stood with folded arms, letting the warm organ hum and slick basslines only get their toes tapping.

It was a resilient two nights of shows that could have been a downer as two headlining acts, the Noisettes and local DJ Mother Hubbard, had to cancel at the last minute. But the week was a success as the creative momentmum of Estrojam showed itself in fine fashion.