Comics Gone Ape! The Missing Link to Primates in Comics

Comics Gone Ape! The Missing Link to Primates in Comics 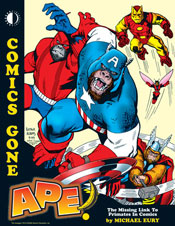 Our forefathers had two essential books, the King James Bible and The Farmer’s Almanac. In the years since, a few more works have been admitted into the canon. In the new century we have the final entry into the essential masterworks of Western civilization. Michael Eury has undertaken the task of documenting every comic book storyline or character involving monkeys or apes (The term “ape” is used interchangeably throughout the book to describe both), and has come up with a fascinating encyclopedic book that you won’t know you needed until you look at it. Many comic fans will remember the Planet of the Apes tie-in series, or Gorilla Grodd, but only a few dedicated souls will remember Bat Ape or The Gorilla Witch (who is shown wearing an eyepatch and stirring a cauldron). Apes and monkeys have graced comic books since the earliest days, with Tarzan and other tales of jungle daring, lasting all the way to the independents and superheroes of today. Every superhero has had a run-in with an ape villain or sidekick, and after image after image of apes and monkeys, you will understand why (Superman seemed to get a perverse kick out of making Lois Lane or Jimmy Olsen marry gorillas).

Eury includes short descriptions of every simian character to grace a comic book, as well as fascinating interviews with artists and writers from the earliest days of comics to today. The chapter on brain transference reveals just how common switching brains with a gorilla was in comics, while the procedure remains fairly rare in real life. The only drawback to Comics Gone Ape! is the lack of color pictures, these covers demand to be reproduced in vivid color. The only other drawback to this book is the fact that it will eventually cost the owner many hundreds of dollars and countless hours of searching to track down all the gorilla and monkey-themed comics listed inside.