Against Me! have quietly become a veteran member of the punk rock elite for this 4th, 5th, or umpteenth wave of the movement that we’re in the midst of. Pulling their ideology from the politically aware artists of the past, these Gainesville boys blend working class ethics of Dylan, Petty, or Springsteen with the more cranked up, social commentary aggression of The Clash or Bad Religion. The result is a distinctive folk/punk blend that sounds like nothing else before them, but can now be heard in any number of MySpace bands who unabashedly rip off frontman Tom Gabel’s unique spoken/yelled vocal approach. 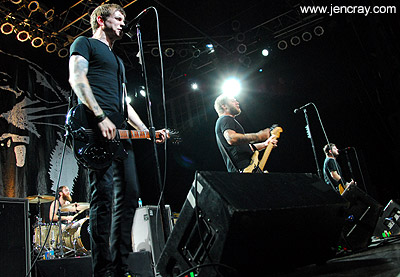 Jen Cray
Against Me!

The band’s latest Orlando date was scheduled right in the middle of the annual Anti Pop Fest, but despite the multitude of alternate shows happening just 20 minutes north in downtown, the House of Blues was still pretty damn packed.

I arrived just as World/Inferno Friendship Society were in the midst of confusing this young crowd with their hard to peg vampiric, lounge, red wine-soaked, circus punk. Frontman Jack slicks back his hair and dresses sharp in a well-fitted suit–he looks more than a touch like Pee Wee Herman–and he gestures dramatically with his arms while he leads his ever evolving nine-piece band through a fun and frolicking set. His between-song banter sounds like a well-educated junkie whose stories and opinions could hold you captivated for hours, and it’s this talk (as much as songs like “Addicted to Bad Ideas,” and “Only Anarchists Are Pretty”) that makes this bizarre ensemble a must see…unfortunately, a large portion of the Against Me! audience didn’t seem open to it. 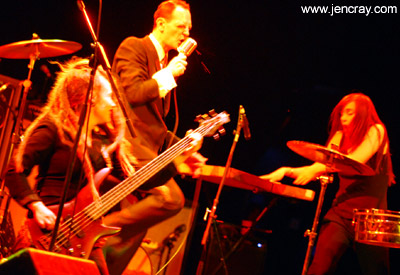 If they weren’t ready for WIFS, they sure as hell weren’t prepared for Sage Francis. The teddy bear of a man stepped out and broke into an a cappella song about Johnny Cash.

“Now I’ve really confused you. I’m a rapper who just sang about Johnny Cash at a punk show!” he said with a smile, before beginning his 30 minutes of strangely goofy, but politically-charged rapping. 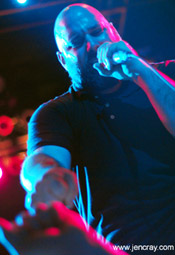 I’m not a fan of hip hop, never have been, and I was definitely not in the minority at this show (“We don’t wanna hear this shit!” some guy kept yelling up to Francis, who took it in stride). However, Francis’ lovable persona, his sampling of Nine Inch Nails, Nirvana, and Mr. Mister (!!!), and the fact that he made fun of Guitar Hero made me want to give this guy a hug. It may not have been a hip hop crowd (though there were some kids who caved in and got into the groove of it), but he worked it well.

Against Me! have a lot of family and friends in Orlando and they must have been caught up playing catch-up with them all, because the band was almost 20 minutes late starting their set. Kids were getting restless and I was getting sleepy, but as soon as the curtains parted and the band’s tiger logo (from the cover of their latest album New Wave) could be seen, the room was more alive than it had been all evening. 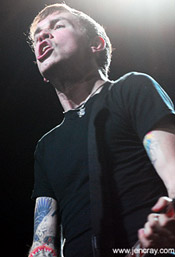 Jen Cray
Against Me!- Tom Gabel

The big controversy surrounding this band is that after years of proclaiming they would never sign to a major label, they signed with Sire Records. Against Me! went to bed with the enemy and ended up making a fantastic album that will probably be the one that pushes them into the attention of the mainstream. This move, which many took as a betrayal (get over it, I say!), seemed to be the last thing on the minds of the fans down front who leaned across the barricade reaching for the stage and screaming along to every word of every song, Sire-affiliated or not.

“White People For Peace,” “Thrash Unreal,” and “New Wave” may have an extra layer of influence from The Cars, but for those who don’t find a whole bunch of fun in this sort of new wave nostalgia, the distinctive Against Me! sound is still present. It’s still mosh-worthy, so don’t worry your pretty little head.