Of course, the sold out crowd was there to see David Gray, but before Gray hit the stage, Nebraskan singer/songwriter Joshua James did a little jarring of the audience with songs off his 2007 debut album The Sun Is Always Brighter. It’s always a pleasure when the opening act plays a solid set of songs that resonate and it’s even better when the performance catches the crowd completely off guard. 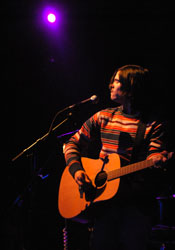 A few songs in, James admitted, “I’m a little nervous.” But the alluringly awkward stage presence complemented the songs, enhancing their meaning as he trudged ahead with a couple of contemporary and unique Dylanesque anti-war folk songs, a seasonal number with “Oh Come, Oh Come Emmanuel,” two cautionary apocalyptic gospel-tinged tales, and one lighter but still direct and self-proclaimed “anti-love” ballad. The Gray-focused crowd wasn’t quite ready for what James had to say or how he was saying it, but that didn’t stop him from playing a set dripping with pure raw emotion and showing that Nebraska’s crop for singer/songwriters looks bright and promising.

On album it’s obvious, David Gray has songwriting abilities to blend lyrical metaphor with precision musicianship and the end result can bring you to some extraordinaryly sublime places. Seeing him perform several tracks from his third and breakthrough album White Ladder, and the hit track “Babylon,” deepens the appreciation as he guided fans through a myriad of emotive peaks and valleys during a set similar to the track list of his current Greatest Hits album. And he made it even harder not to respect the power of his live show when he revealed a flaw in the night’s performance.

“Do I seem a little flustered?” Gray asked and then explained that the instruments he and his band were playing with were not theirs and how they were playing with borrowed instruments while their own were headed on to the next tour stop. Didn’t matter. The fans didn’t seem to care as he mesmerized them with a new single “You’re the One” from Greatest Hits while also packing the set with past hits and a new track “Breathe” from a forthcoming release due out in 2008.

Feeding off and at times playfully flipant with the deafening chorus of a thousand female fans/backup singers, Gray went from song to song as his musicianship, constant energy and the naunce of in-between song storytelling revealed something I didn’t get from his songs before as they became transparent and no longer just mushy pop songs serving as contemporary love ballads for the ladies. It was a surprising ninety minute moment when a once lukewarm interest became an unexpected moment of clarity and newfound interest.

Toward the end of the show Gray said, “…music is a form of transport.” I completely agreed with him and still do now. I entered the Park West a curious skeptic who, for the most part, through only his most popular song “Babylon,” knew what Gray might be about. And even though Gray ripped on the Park West for having a shitty piano to play his encore of “Forgive Me,” I have nothing but deeper appreciation and respect for him and I have to say that sometimes a song can be heard so much, or in an unfavorable context, that you end up overlooking the song and the artist for all the wrong reasons.