Leaving the sweaty stench of the Between the Buried & Me gig behind me, I was speed-walking for five blocks to The Club @ Firestone to catch the freshly reunited Dinosaur Jr. 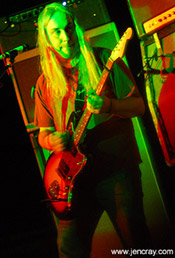 A quiet reunion (including all three original members: J. Mascis, Lou Barlow, and Murph) compared to some of the more blockbuster acts that have found their way back to one another this past year, it is nonetheless one that many fans have been crossing their fingers for. The club may not have been filled to capacity, but the bottom floor was respectfully packed. After the madhouse down the road at show #1 of the night (the aforementioned metal gig was sold-out to the point of discomfort), I was elated to have some breathing room as I elbowed my way easily to the front of the stage for Dinosaur Jr.’s set.

Hiding inside the blues, pinks, and greens of the house’s lightshow, the band that once rubbed shoulders with the likes of Sonic Youth and Nirvana allowed their music to be the only spectacle for the night. Mascis barely opened his eyes, and Barlow hid behind his wild mane of hair, but drummer Murph seemed happy as a clam to be staring out at an entertained audience of fans once again.

The band’s got a new album to promote, Beyond – their first in a decade, and the new songs rub nicely against the old in a beautifully indistinguishable blur of distortion and melody. One of the strongest songs on the new disc, “Been There All the Time,” could have easily been nestled inside one of the band’s old classic full lengths – especially when given an extra shot of aggression on the stage. 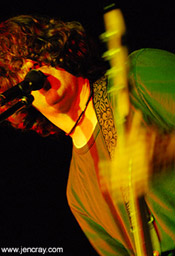 I was never a big Dinosaur Jr. fan, I only stumbled upon them because of my love for Barlow’s post-Dinosaur project, Sebadoh. So, I’ll admit, it was the return of Lou that brought me to the show on this night.

Oddly enough, I caught the Sebadoh reunion about six months ago and was surprised at how timid Barlow was on-stage. He mostly allowed his bandmate Eric Gaffney to play the role of frontman for the night (for the record, in the trio that is Sebadoh, all three members take turns on lead vocals), preferring to just slide into the shadows.

So, imagine my surprise to see Lou chewing his tongue and thrashing about as he pounded out bass parts on long-lost hits like the crowd pleasing “Feel the Pain.” He seemed ten years younger, and I swear I even saw him crack a smile beneath that mass of hair! 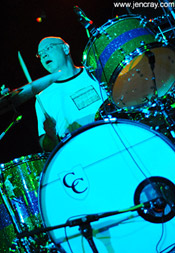 Calling “Feel the Pain” (the band’s biggest commercial hit) crowd pleasing isn’t actually doing the moment justice. A pit started up… a PIT for Dinosaur Jr! It was not something I thought I’d be seeing for a band whose most mosh-worthy moments occur in the in-betweens. Mascis’ metal-tinged solos are soaked in feedback and Murph’s foot does get heavy at times, but the vocals always seemed too pop-friendly to inspire anything more than a little head nodding and the occasional bounce. Not in Orlando, apparently! Here, the kids were so ecstatic to hear the song (they were probably too young to have heard the first time around), that they injected it with their own brand of friendly aggro.

The night ended with an appropriately head shrinking solo by Mascis and a softly muttered “thank you.”