“Isn’t that the guitarist from For Ex-Lovers Only over there?” I asked my girlfriend as we walked in. Turns out it was. And he wasn’t the only Orlando musician who drove four hours to Tallahassee on a weeknight to see what would be Jens Lekman’s first-ever Florida performance. Not including the two who rode in my car, I counted at least three other Orlando-area musicians that I recognized from the coffee-house circuit among the early-birds there when the doors opened. By the time Jens introduced himself and started playing his first song, “Sipping on The Sweet Nectar”, the small Club Downunder in the middle of FSU campus had flooded with what seemed like every proud owner of a retro-sweater on campus. Jens, on the other hand, wore a ridiculous orange sweater with a large picture of a parakeet on it. After the acoustic, post-Barry Manilow balladry of Jens’s first song, the packed house of at least a couple-hundred gave him rockstar-worthy applause, even if that song was possibly his least impressive and most straightforward of the night. 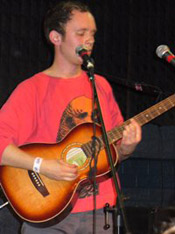 Before he started playing, I thought it funny that the sound technicians had left a second microphone on the stage. I’d wondered if maybe he’d be accompanied by one of the members of his infamous six-girl band that he brought to the Pitchfork Music Festival in 2006 and on a few other dates of his current tour. By the second song, though, the purpose of Jens’ second microphone became obvious. With his guitar still in hand he began to “ooh” into the second microphone while stepping on an effect pedal at his feet. After he stopped “oohing” into the microphone, and the last “ooh” kept playing on a loop, the purpose of the second microphone (and the effect pedal at his feet) was clear. As he went on to “Ooh” over his last “ooh” and stack “oohs” on top of “oohs,” the overall loop began to take form and I recognized it as the vocal harmony sample from the song “Postcard to Nina” on his latest album, Night Falls Over Kortedala. After he miraculously recreated the album’s vocal sample, he began to play the guitar chords over them on his small acoustic guitar. Returning to the first microphone, he began to tell us the story about this girl from Berlin named “Nina”, to whom the song is presumably written, and how he took a 20-hour train from his native Sweden to visit her since it was $5 cheaper than the two-hour flight. Keep in mind, his comments came while the gorgeous vocal sample that he recreated live only moments ago still looped in the background like some sort of invisible, robotic Temptations.

He went on to play a few other songs, using the vocal loops on some and not on others. Still, the vocal loop virtuosity stood out the most. His other most notable vocal loop song came when he played another highlight from his latest album, “Kanske Ar Jag Kar I Dig,” whose title, meaning “Maybe I’m In Love With You”, is one of the only traces of the Swedish language on his otherwise entirely English-language catalog–besides his obvious accent. Yet what is most interesting about this other highlight is not the use of the Swedish language on what is essentially a Detroit-style soul-song. It’s that, on the Kortedala album, “Kanske” uses the exact same vocal sample as “Postcard To Nina” (perhaps another moment of ironic self-reference, for which he’s almost as well-known for as his incredible voice). Once again, turning to the second microphone, Jens recreated the stack of “oohs”, only this time adding the “bomps” and “bahs” to the stack that differentiate the loops of the two songs. And, once again, Jens proved his mastery of his own voice to the audience by doing alone what it took five Beach Boys and Four Freshmen to do.

Shortly after those miracles, Jens Lekman pulled off another miracle. Rather than filling the stage with the drum-machines and pianos and synthesizers and sampled Motown bands that were all present on the album, Jens finished his otherwise acoustic set with two iPod-accompanied songs (which, by the way, were the songs “I’m Leaving You Because I Don’t Love You” and “The Opposite of Hallelujah” from Kortedala). The miracle? Well, the partially prerecorded, iPod-accompanied performances didn’t suck! In fact, he remained as animated and as vocally adept as ever. And to make matters even better, he gave the audience a musical wink by allowing the rest of the mystery sample on “Opposite of Hallelujah” to be revealed at the end of the song. This doesn’t happen on the album. Turns out that the loop in “Opposite of Hallelujah” comes from a piece of the song “Give Me Just A Little More Time” by Chairmen of the Board. Jens Lekman’s pre-encore set closed with that blaring “Give Me Just A Little More Time” loop taken from its chorus and Jens, having just put down his guitar, lip syncing to the 1970s Detroit-soul hit and doing a ridiculous Macarena-like dance at the same time.

After his four-song, acoustic encore, he promised to hang out with the audience and play more songs off stage, face to face. Although our long drive back to Orlando stopped us from finding out how well he lived up to the second half of his promise, he followed-through with the first half and stuck around to meet, greet, and take pictures with just about every one of the audience members, including all of the musicians and fans who drove there from Orlando. It struck me during this meet and greet that, even though his latest album topped the charts in Sweden for a few days in September and his status there may be like that of a Justin Timberlake here, Jens Lekman’s idiosyncrasies (like his orange, parakeet sweater and Swedish accent) will most likely keep him from ever topping the charts in the United States. Even so, Lekman accomplishes what Timberlake–with all his popularity in this country–can only dream of: bringing the most cynical of American hipster-listeners out to see a live, pop singer.