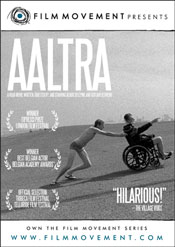 American comedy writers and actors are just now scratching the surface of something that their European counterparts have been waist deep in for the better part of a decade. For lack of a more definitive term, let’s refer to it simply as “the comedy of discomfort.”

TV shows such as Jam, Chris Morris’ brilliant foray into postmodern comedy, and The Office offer up as many laughs as they do moments of pure cringe-inducing weirdness. The watered-down version that we get usually comes with the stamp of approval from a Brit, as with the American version of The Office and Sasha Baron Cohen’s work on both HBO and the big screen.

If you can handle the European comedic vision, the trouble is that it is really hard to come by. A show like Jam would never pass muster, even on BBC America, thanks to its rampant sexual content, and a movie like Aaltra, the French comedy of errors conceived and produced by Benoit Delépine and Gustave Kervern, is seeing a DVD release in the U.S. through the small, but redoubtable subscription-based distribution firm, Film Movement.

It makes sense, considering that the subject matter of the film would turn even the most adventurous independent movie company a little green at the gills. The story revolves around two men, neighbors who fatefully cross paths one day. One, a farmer, unwittingly gets in the way of the other’s attempts to get from his country home to Paris and in doing so, costs the man his job. In a fit of drunken anger, the businessman attacks the farmer, and both end up pinned under a piece of farm equipment, rendering them both paralyzed from the waist down.

The rest of the plot is decidedly threadbare, as the two, both off on their own adventures, are forced together, eventually joining forces to get to Finland to confront the makers of the farm equipment that crippled them. Although that is movie enough, it’s really just an excuse to put together an extended series of set pieces that are alternately ridiculous, bombastic, and bizarre.

What brings on the discomforting squirms is watching the two men take full advantage of the good graces of the strangers they meet along the way. Whether they are picked up by a German family in an RV or allowed to take a spin on a prototype of a new motorbike, the men steal, lie, and generally stretch people to their absolute limits. It’s fascinating, and often quite hilarious, to watch these situations unfold again and again.

By this point, you should be able to see why a film like this never saw wide theatrical release here in the States. Groups advocating on behalf of the handicapped would most likely bristle at the portrayal of two paralytics as vindictive, deceitful, and downright selfish people. Those qualities, though, make them even more human, and almost fully liberated, showing us that they can be just as cruel as the rest of the able-bodied world.

What can’t be argued with is that this film is the work of a pair of genuine comic geniuses, the type of writers and performers who know that sometimes humor works best when it has a cold snap to it.