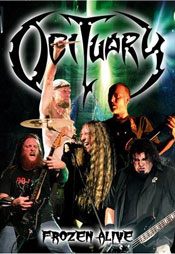 Obituary is, god, such a pivotal band for me. The first death metal I ever heard – I bought Slowly We Rot on a whim as a young lad just because I couldn’t believe the cover, it looked simultaneously horrifying and total b-movie cheese. I wasn’t disappointed. Their sound was like a gateway drug to death metal, doom metal, gorecore, and older extreme sounds like Celtic Frost and Bathory. The songs were so heavy and uncompromising, downtuned and haphazard. Hell, John Tardy didn’t even bother singing lyrics on the first album. It split my metal-listening friends down the middle, half followed into louder and more evil sounds (Deicide, Carcass, Morbid Angel, Sarcofago, Godflesh) while the other half thought it was the worst piece of crap they’d ever heard. At that point, I knew I had a winner on my hands. I lost touch with them over the years, but every time I revisited their early records I found that they still sounded fundamental and modern – and news that they were still touring them and wowing the kids was always heartening. (Plus I heard once they were all scientists in their day jobs and just did Obituary as a lark – which I thought was awesome.) Anyway, the timing on this DVD live collection is great because the band has reconvened – with the original lineup still intact, a total rarity for death metal – for a new album, Xecutioners Song and this live DVD from Poland serves as a great visual supplement.

So what does the band look like twenty years later? Vocalist John Tardy hasn’t changed a bit, still with hair down to his waist and slashed camouflage shorts, face flushed red from screaming. Unflappable guitarist Allen West looks almost more like a cool jazz musician these days, gaunt and black-clad, but with a shaved head and a graying beard adding a little gravitas, his stage moves are totally Bill Wyman-esque. Bassist Frank Watkins looks exactly like the recently departed Paul Raven or a hardcore dude. Drummer Donald Tardy resembles a Ted Nugent fan, with huge beard, long stringy hair and camouflage hat. Most striking is haunted guitarist Trevor Peres’ evolution – the spooked gray eyes are still the first thing you notice, but the man has bulked up, has an unfeasibly thick beard and is sporting a spiked cuff a la Kerry King – he’s probably the visual focal point for the band. I love it when, at the very end of the concert, he raises his feedbacking guitar in triumph and then callously punches it to the ground, leaving it there to scree in torment.

The track listing is superb and surprisingly subtle. Older classics like “Chopped in Half”, “Find the Arise”, and “Slowly We Rot” nestle comfortably next to newer numbers that aren’t necessarily from their “holy trinity” of albums (Slowly, Cause of Death and End Complete) and it’s interesting for me, as a lapsed fan, to see that there really hasn’t been a noticeable dip in quality control or feral rawness. The individual songs bleed into one humid wave of savage death throes – equal parts sludge and speed – without the band ever forgetting the basic heaviness that brought them to the attention of metal fans originally. That buzzing, downtuned, horde-of-mosquitoes guitar tone is still omnipresent; amazingly John Tardy hasn’t destroyed his voice after nearly two decades of bestial roaring and the painfully precise rhythm section knows that sometimes less is more (thank god). And I get a satisfied kick out of seeing the three guitarists playing copious open notes on their guitars, like a fleet of middle fingers aimed toward proper guitarmusick wank.

The extras are plentiful and tasty! No less than three music videos, a couple of short doc/making-of features and two long interviews with members of the band hosted by a painfully earnest Polish journalist. It’s funny to hear John Tardy’s slight Southern twang contrast with his rather singular vocals but the band’s answers are informative and well thought-out and I must say, it’s inspiring to see such easy familiarity and camaraderie between the band members. They seem like really nice, gracious fucking guys – even copping to the Celtic Frost influence readily.

Frozen Alive is how death metal concerts should be presented! Obituary ply their trade in a huuuuuuuge club in Poland, packed to the gills with metal faithful, with a great fucking lightshow (bathing the band in deep, sickly green for some of their older numbers was a nice gambit) and the camerawork and film quality is top-fucking-notch! Multiple cameras track each band member, including a camera perched behind Donald Tardy’s drum riser (!) with a shot so crisp you can basically see the sweat roll down his back. None of that handcam-from-the-pit nonsense. And the clarity of the picture, man oh man. It’s like a window into an alternate reality where Obituary replaced Slayer as the king of all metal bands, and Obituary more than bring the necessary conviction in their performance.

Welcome fucking back. I missed you.