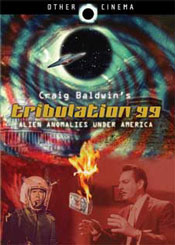 What we refuse to take responsibility for, we assign to a conspiracy. The CIA did it, Ronald Reagan did it, the Air Force won’t admit they’ve been dealing with alien powers, and Fidel won’t die because Gordon Liddy told him not to. Maybe you believe this, or maybe you just miss the Weekly World News, but Craig Baldwin has assembled nearly an hour of found-footage that shows the connection between aliens from planet Quetzcotl, the United Fruit Company, and leftist Caribbean politics. And what IS that nefarious relation? It’s a network of underground tunnels that connect the Pentagon and the drug fields of Columbia. There’s no coherent narrative, just an ominous voice-over interspersed with graphics like “Rivers turn to blood”, stock footage from CNN, and old saucer films. Wild claims mix with recent history and never do you have a moment to think about what was just said or shown. You’re never sure where this film is headed, but you know your deepest fears are true, and there’s nothing you can do about it. Curse those banana cartels!

This parody of conspiracy documentaries burns into your mind like videos on the original MTV. It’s better done than a Church of the SubGenius tape, but clearly in that vein. Select the director’s commentary track and listen to Mr. Baldwin offhandedly tell where he got his film from, and what he’s trying to say. He does have a political agenda, but that’s not his point. This is how video and sound and broken logic make things look real. And if you really, really believe, Baldwin’s comments will only convince you that your paranoia is truth. Put on your Aluminum Foil Deflector Beanie and turn down the lights on this one. It’s weirdness, above and beyond the call of your patriotic duty. Me? I’m going down to overthrow some third-world dictator. If I can just use my frequent flyer points…